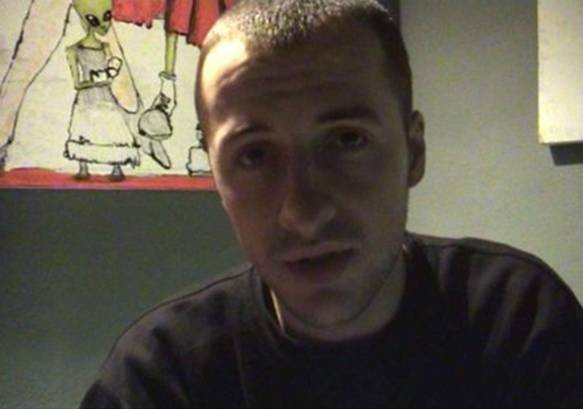 In spring 2011 De Hallen Haarlem presented three exhibitions with recently acquired works. Three video works by the Swedish artist Klara Lidén (1979) and one video by Jakup Ferri (Kosovo, 1981) were being screened, and the installation Democracies by the Polish artist Artur Žmijewski (1966) was being shown. The acquisition of these artworks meant a substantial enrichment of the collection at De Hallen, in which work by engage artists and artists working in a documentary style is richly represented.

Jakup Ferri - An Artist Who Cannot Speak English Is No Artist
In 2010 De Hallen showed the solo presentation Paper Vegetables by the Kosovar artist Jakup Ferri (Pristina, 1981). The drawings and mosaics in this exhibition revealed how, in both miniatures and in large wall drawings, Ferri was able to conjure up a lightly surrealistic world with simple means, a world in which both bittersweet melancholy and optimism were present. Ferri's work in Paper Vegetables, often showing a comic strip-like directness, was to a great extent the product of his residency at the Rijksakademie in Amsterdam. From this exhibition De Hallen acquired a drawing, and in addition bought the 2003 video work An Artist Who Cannot Speak English Is No Artist. The latter was presented in the Cabinet of De Hallen Haarlem from 26 March through 13 June, 2011.

In the video work An Artist Who Cannot Speak English Is No Artist Ferri engages in a monologue in front of the camera in English – a language that he has not really mastered. The artist, then still only 22 years old, tells the viewer a story that appears to be about his life and his ideas about being an artist. But because of his faulty English, which prevents him from getting his story across well, the emphasis comes to lie on the essential role that language plays in the international art world. Ferri borrowed the title from a famous work by the Croatian artist Mladen Stilinovic, from 1993 who used this pointed aphorism to summarise the problems of a globalised art world. After the fall of the communist regimes in Eastern Europe at the beginning of the 1990s the borders opened up for artists too, and they were confronted with a freedom that was limited by the language of the West. In this video work Ferri carries Stilinovic's observation through in an ironic manner.
www.dehallen.nl