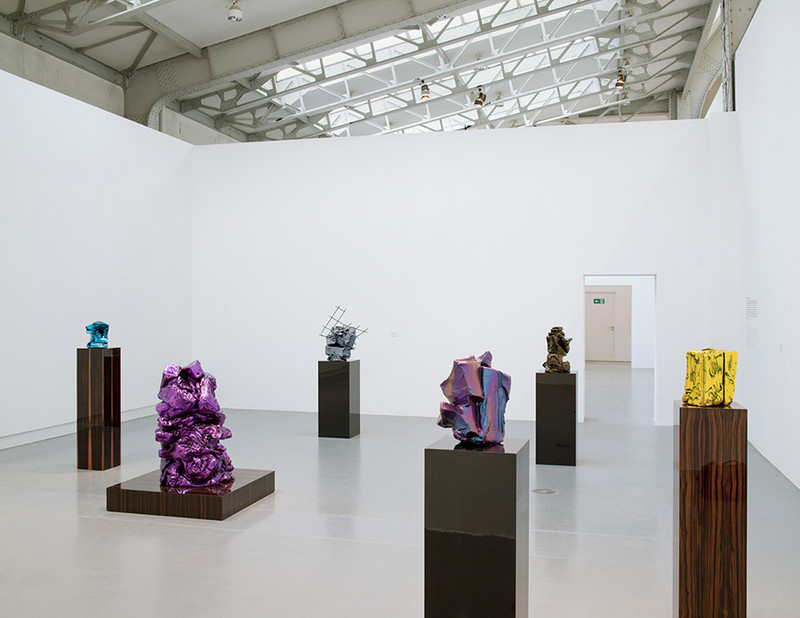 Hamburg’s Deichtorhallen are presenting a comprehensive solo exhibition entitled »Mystic Silver« on Anselm Reyle, the Berlin-based artist who teaches at Hamburg’s University of Fine Arts. The show will run from November 9, 2012 to January 27, 2013 and is curated by Dirk Luckow and the artist. It features some 80 selected works from the different series created in recent years as well as new pieces devised specially for the show.

Reyle meets this challenge by separating the 3.200 sqm large North Hall into two different sized areas: Like a curtain, a wall made of silver foil separates a room illuminated with natural light from a dark room. He shows a typical selection of his paintings, which are based on each other in their conceptual development, such as stripe paintings, gestural works, various foil paintings to recent works following the »paint-by-numbers« principle.

From his sculptural oeuvre, along with the so-called »African« sculptures made from colored mirrored bronze, including »Eternity«, are some earlier sculptural objects such as his neon yellow hay wagon, a delicate neon light installation, the current conception of his sculpture »Philosophy« based on architectural elements and a wall relief lit by LEDs.   In spite of the wide spectrum of material and form, these haptic-visual works oscillating between architecture and sculpture are combined coherently.

Reyle's exhibits in the main room are subject here to a double reflection: They are not only mirrored distortedly in the foil walls, but also against each other in the repeated use of a specific formal language and an artistic material repertoire using found objects from the urban field and trash from »low culture«. He confronts this with art-historical adaptations of the »high art« of the 20th Century, such as Pop Art, Minimalism, Abstract Expressionism, Hard Edge painting and presents them equally as divergent motif-historical sources.   Old ideas are absorbed, translated into current, generally accessible formulations and intensified in the context of an enterable installation. Anselm Reyle has been involved in several collaborative projects in recent years, such as with the traditional porcelain manufacturer Meissen or with the Austrian artist Franz West, whose artistic results of these collaborations will also be exhibited in Hamburg.

The exhibition will be accompanied by a catalog published by Distanz Verlag and boasts countless illustrations, including many images of the installations, and essays by David Ebony and Dirk Luckow as well as an interview Friedrich von Borries conducted with Reyle. Following its time in Hamburg, the exhibition will move on, in slightly adapted form, to Magasin in Grenoble, and the catalog is therefore trilingual (in English, French and German).

Anselm Reyle was born in 1970 in Tübingen. He studied fine art in Stuttgart and Karlsruhe. In 1997, he moved to Berlin, where he founded a studio with John Bock, Dieter Detzner, Berta Fischer and Michel Majerus. Together with Thilo Heinzmann, Claus Andersen and Dirk Bell he ran the artists' co-operative gallery »Andersen’s Wohnung« and »Montparnasse«. Since 2001, he has been working with a team of assistants. Last year he moved to a new conceptually designed studio property on the river Spree.  Reyle has held a position as professor at the University of Fine Arts in Hamburg since 2009.

The artist is most well known for his stripe paintings – a response to the formalist vocabulary of Clement Greenberg –, his alluring glossy foil paintings and the »African Sculptures«. Characteristic of his approach is the use of found objects, which have been distanced from their original function, alienated visually and put into a new context. He is working in the media of painting, sculpture, and installation, thereby using particular materials such as Mylar of shop windows, acrylic pastes, car lacquers, LED-lights and useless residues from our civilization. Reyle critically reflects not only upon the prevailing codes of taste but also the sometimes utopian ideals of Modern abstraction.
www.deichtorhallen.de