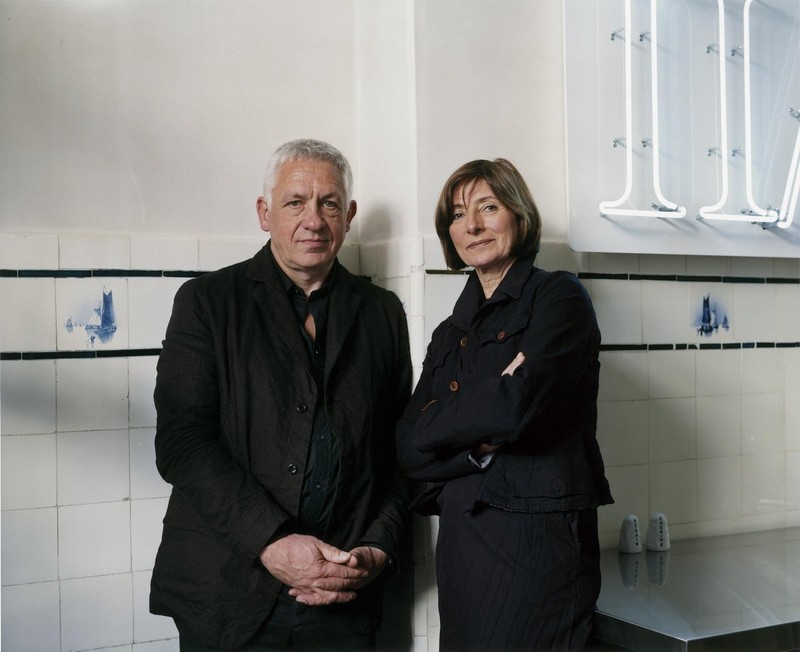 The Falckenberg Collection is located at the Phoenix-Hallen in Hamburg-Harburg.
The exhibitions can be visited either during the previews or as part of a guided tour. Special guided tours for groups can be arranged for any day.  To register and for further details, please visit www.sammlung-falckenberg.de/besuch


The collection of Barbara und Axel Haubrok in Berlin is one of the leading collections of contemporary art in Germany. Like no other, it focuses consistently on international contemporary Concept Art and thus on multimedia art, in particular on video, photography and installations.

As of the end of the year, Deichtorhallen Hamburg will be presenting in its Sammlung Falckenberg satellite a representative cross-section of works from the Haubrok Collection. Inviting private collectors to exhibit their works in Hamburg has meanwhile become a veritable tradition. Thanks to it, specifically in the premises of Sammlung Falckenberg spectacular and in part quite unforeseeable interaction between artworks arise. This form of dialog or mutual commentary not only affords a comprehensive insight into the visiting collection in a new context but also offers a new take on the Sammlung Falckenberg as part of the Deichtorhallen exhibition program.

The Berlin couple was invited to decide the exhibition concept and installation themselves and choose how to use the premises and participate in the Sammlung Falckenberg agenda. Installations will form the core of the exhibition, featuring more than 60 pieces from the Haubrok Collection. The selection focuses on formal, essentially restrained works that for that reason alone already contrast with most of the Sammlung Falckenberg’s holdings. The list of artists includes well-known names such as Martin Boyce, Carol Bove, Christoph Büchel, Martin Creed, Willem de Rooij, Rodney Graham, Wade Guyton, Cady Noland, Simon Starling, Kelley Walker, Haegue Yang and Heimo Zobernig. It will also present lesser-known artists such as Michael Beutler, Tim Lee, Rodney McMillian, Ruben Ochoa, Stephen Prina, Michael Riedel or Jan Timme.

The exhibition will stretch across three floors of the Sammlung Falckenberg building in Harburg. Michael Riedel has developed a poster piece for the exhibition that will also be on show at the Sammlung Haubrok in Berlin next year. Berlin-based artist Michael Beutler has expanded his site-specific piece entitled »Copy Graffitty« with in light of the specific spatial setting in Harburg. Moreover, light art by Cerith Wyn Evans and Olafur Eliasson will be on display on the factory floors of Sammlung Falckenberg and there are sets of works by Haegue Yang and Florian Slotawa awaiting discovery by visitors. A film theater has been created to screen Rodney Graham’s »Two Generators«.

The exhibition is entitled »No Desaster« after a terse drawing by Georg Herold, an artist represented in both collections. The title is also intended to highlight the fact that the encounter between two so very different approaches to collecting need by no means culminate in chaos. Rather, the idea is to have the conceptual positions championed in the Haubrok Collection interact with the more provocative positions espoused at Sammlung Falckenberg. Both collections elucidate representative angles taken in postmodern contemporary art.

In 2002, the Haubrok Collection went on show for the first time at Museum Abteiberg in Mönchengladbach in the »no return« exhibition (catalog). As part of the »Die Kunst zu Sammeln« project, Museum KunstPalast in Düsseldorf presented political works from the collection in 2007.


Since 2005 Axel and Barbara Haubrok have organized regular exhibitions in Berlin, initialy at their apartment in Xantener Strasse, and since spring 2007 in their own showroom at Strausberger Platz 19. There, three or four thematic or monographic shows are held each year – in close collaboration with the artists involved. In the early years only works from the collection went on show, but since this year the exhibition concept has been extended to other artists’ projects. The exhibitions are open to the public on a Saturday and those to date are documented in the »we showed« catalog brought out by argobooks (2012).

Some of the most important pieces in the Haubrok Collection such as »Das Schlafzimmer« from Gregor Schneider’s »Ur House«, Tobias Rehberger’s »Brancusi Raum«, Tino Seghal’s »This is Propaganda« and Andreas Slominski’s »Hundemassenfang« were donated to a special purpose foundation in 2008. Since 2010 they have been loaned on a permanent basis to Stiftung Preußischer Kulturbesitz, Berlin.
www.deichtorhallen.de