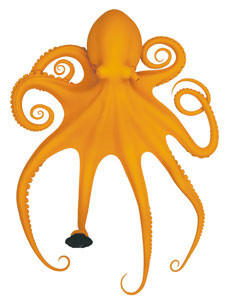 Since the artist’s inaugural exhibition of the K 21 in Düsseldorf in 2001, Deichtorhallen are the first to present a comprehensive solo exhibition of Katharina Fritsch (born in Essen, Germany in 1956). The work show, set up in cooperation with Kunsthaus Zürich, will be exclusively presented in Germany at Deichtorhallen Hamburg. As one of the leading female artists in Germany and on the international scene, Fritsch represented Germany at the Biennale in Venice in 1995 and exhibited at Tate Gallery in 2001.

Around 15 mostly large-sized work groups – presented in Germany for the first time – will give an overview of the artist’s very recent production of the past decade. The exhibition will also review on Fritsch’s striking, partially well known works such as “Tischgesellschaft / company at the table” (see fig.; Museum Moderner Kunst Frankfurt am Main) and “Elefant / Elephant”.

By means of sarcastic humour, Fritsch examines the world of everyday life, tourism and consumption. Collective symbols and personal reminiscences, emerging in her pictures and large-sized object sculptures, may cause deep emotions in the observer. During the last few years, Katharina Fritsch has particularly dealt with photography and its conversion into monumental pictures as well as with personal memories from childhood.