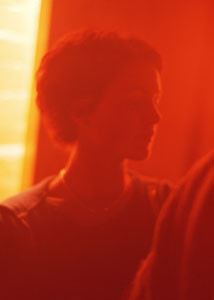 The House of Photography at Deichtorhallen Hamburg is presenting in cooperation with the Museum Folkwang the first retrospective in Germany of the British photographer Paul Graham (b. 1956) with 11 major work complexes produced since 1981. With about 145 images, the exhibition shows a representative selection of his work.

Graham’s work belongs to the tradition of social documentary photography, which was founded by Bill Brandt in England after the second world war and continued by photographers such as Chris Killip and John David. In dealing with it and with American photography from the 60s and 70s, Graham developed an innovate artistic work whose view is directed uncompromisingly at social reality.

Paul Graham lives in New York. His latest series, American Night and A Shimmer of Possibilities, were made in the USA. His exploration of the American black and white photographic work of Gary Winogrand, Lee Friedlander and Diane Arbus, who define their work as individual statements on social developments, but also the color photographs of Stephen Shore and William Eggleston whose interest is directed at everyday situations and objects, marked Grahams, pictorial language.

At a time when art photography is increasingly staged, manipulated or produced in a studio, or when the world is kept at a distance with a cool conceptualized manner, Grahams work distinguishes itself with its constant observation and questioning on the realities of life.

Graham’s first publication, A1 – The Great North Road appeared in 1981 and was a documentation made along the English north-south highway. Already here, Graham draws on the traditional genres of photographic practice and reassembles them anew. In the series Troubled Land from 1987, which deals with the situation in Northern Ireland, he combines landscape photography and war photography. The year before, the color reportage Beyond Caring appeared, a stock-taking of English unemployment offices and their desolate sadness. In the series American Night (1998–2002) or in End of an Age (1996–1998) he shifts the frontiers of what is commonly accepted as image or portrait.

The evolution of his photographic work is closely tied with the question of presentation, which he developed for individual projects from large format tableau to small format sequences. Paul Graham has taken up the strong tradition of British social documentary photography in his work in order to enrich it in a variety of ways and to develop it further. His work provide critical input into photographic discourse and call into question documentary photography with their “statements”. The printed image and the book are thus given special import. While his early projects were presented in the classic series of tableau format with unchanging size, Graham as developed for his more recent work a very individual book form with which their various formats, materials and sequences distinguish his special methodology.

The book accompanying the exhibition includes three essays by David Chandler, Michael Almereyda and Russel Fergunson as well as an illustrated biography (384 pages, of which 250 in color – price 48 Euro).