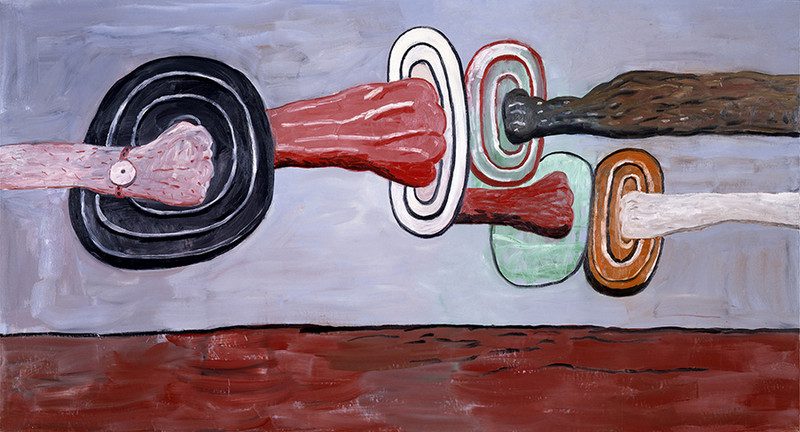 The Falckenberg Collection and the exhibitions can be visited either during the previews or as part of a guided tour. During the exhibitions the latter are held regularly on Wednesdays and Thursdays at 6 pm, Fridays at 5, as well as Saturdays and Sundays at 3 pm. Guided tours through the collection are held on Saturdays at 11 am. For booking your tour please visit www.sammlung-falckenberg.de/besuch

The courageous and quite extraordinary oeuvre of US painter Philip Guston (1913 − 1980) was one of the most controversial of the age. He was the first painter to return to figuration in the post-War era and was quite pioneering in linking high art and images from popular culture, so that today many celebrate him as the trailblazer of postmodern, figurative painting. In 1950, though self-taught Guston earned his spurs in the New York art world as defined by Jackson Pollock, Willem de Kooning and Mark Rothko, and emerged as one of the major champions of Abstract Expressionism.

With a selection of around eighty paintings and drawings, the exhibition unites loans from the Museum of Modern Art, New York, the Centre Pompidou, Paris, and the Stedelijk Museum, Amsterdam. The autodidact Guston gained a foothold in New York’s art scene in the 1950s and became one of the most important representatives of Abstract Expression around Jackson Pollock, Willem de Kooning, and Mark Rothko. An intense drawing phase began in the late 1960s, culminating in a painterly break with the »purity requirements« of abstraction: Guston introduced crude figures and fragments of figures into his works; they populated his pink, red, black, and blue canvases − smoking, drinking, often painting as well. Guston’s subjects include large heads, hairy legs, clumsy shoes, and all manner of architectural fragments such as walls, doors, and light bulbs reminiscent of 1920s comics, and they often come over as the precursors of »Bad Painting«. The large-format works come down full force on the viewer. Despite their apparent formal weightiness, content-related openness, and blurred mystification, the paintings are based on profound sensitivity and the artist’s far- reaching content-related and painterly consistency. In 1970, the first exhibition of these paintings outfitted with an anarchistic sense of humor and the grotesque caused an art scandal in New York, as numerous critics took offense at his »betrayal« of abstract art. Yet the intensity and unsettling power of Guston’s late works exercise an enormous influence on many of today’s younger artists.

At the end of the 1960s, he embarked on an intense phase of drawing, something that culminated in his breaking away in painting from the »purity« demanded of abstract art: Guston introduced coarse figures and fragments of figures into his works; they populate his pink, red, black and blue canvases, smoking, drinking, and not infrequently painting. Large heads, severed hairy legs, clumsy shoes, and all manner of architectural fragments such as walls, doors, and lamp bulbs are among Guston’s themes, which are reminiscent of 1920s comics. The first exhibition of these paintings, with their anarchic sense of humor and feel for the grotesque, was in 1970 and caused a veritable scandal, as many critics accused him of »betraying« abstract art.

To mark the 100th anniversary of his birth, the Deichtorhallen Hamburg-Falckenberg Collection is honoring Philip Guston with an exhibition boasting a concentrated selection of some 40 works from what was his most exciting period, showing how they form a milestone in American painting.
www.deichtorhallen.de