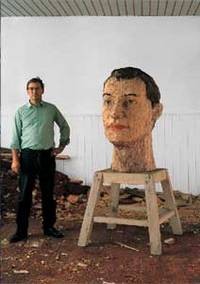 The large exhibition hall of Deichtorhallen will be the place for the comprehensive Stephan Balkenhol show, which he develop especially for the location in Hamburg. Stephan Balkenhol first exhibited his figurative sculptures in the early 1980s, flying in the face of the dominant trends of minimalism and conceptual art. Today, his casual and undistinguished “guys and gals” have a contemporary resonance that has gained him notoriety on the international art scene. Born in 1957 in Fritzlar, Germany, he studied art in Hamburg with Ulrich Rückriem. Balkenhol rebelled against Rückriem's mathematically precise aesthetic. Traveling throughout Europe after graduation, he studied the sculptural traditions of the past and found his greatest affinity was for the art of ancient Egypt with its “... fascinating aura of eternity and tranquility.”
Balkenhol's figures are a kind of twenty-first century “everyman” – neither idealized nor individualized. The “standing man” character has been described by one critic as “... short, homely and needs to lose a few pounds. He's the type of man you would never notice in a crowd, and who would no doubt bore you to tears on a date (he'd probably spend the evening talking about his power drill)." The artist makes these figures from soft wood (poplar or African wawa) cut with a power saw, hammer, and chisel creating rich surfaces where every mark of the chisel is visible. Calling to mind the great tradition of German figurative sculpture in wood and the expressionist heritage of the Germans, Balkenhol's people are curiously devoid of emotion and have been described as “German Expressionism without the expressionism.”
www.deichtorhallen.de