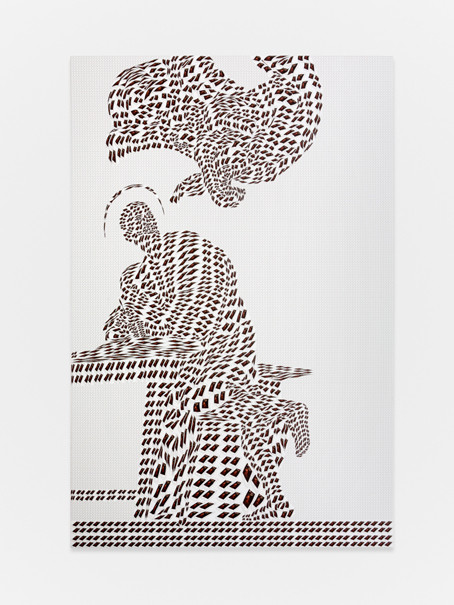 dépendance is pleased to present Thomas Bayrle’s third exhibition at the gallery. Bayrle integrates dépendance’s renewed venue of two exhibition spaces mirrored architecturally into the constellation of two periods in the artist’s practice: The left gallery with works from 1990s and the right gallery with new paintings (all 2015).

While in the 1990s football works on paper the depicted subject is composed of numerous tiny mirror images of itself, the three new canvases merge two periods and two foundations of culture, feature iPhones portraying Caravaggio’s painting Inspiration of Saint Matthew (the 1620 painting was commissioned by the French Cardinal Matteo Contarelli, the canvas hangs in Contarelli chapel altar in the church of the French congregation San Luigi dei Francesi in Rome, Italy). Both bodies of works are based on rhythm, repetition, and the aesthetic principle of the serial which have always been an essential element of Bayrle’s work. In the tradition of artists like Andy Warhol, Roy Lichtenstein and Sigmar Polke, the artist draws his motives and themes from the world of goods and the consumer society, presenting engagement with advertising and comparisons between mass iconography and systems in both East and West.

An influential and pioneering figure, German artist Thomas Bayrle (b. 1937 lives and works in Frankfurt) has been an important reference for several generations of artists, both through his

teaching (he taught at the well-known Städelschule from 1975 to 2002), and through his participation in international exhibitions (Documenta 3, 6 and 13, the 50th Venice Biennial, etc.).

Over the years, Bayrle has built up an extremely coherent body of work, one that tends towards the obsessive while combining allegiances to Pop, conceptual and Op art in unique ways.

In the 1960s, Bayrle started to produce works based on the serial repetition of the same pattern, a move inspired by structuralism, which was proving extremely influential for minimal, Pop and conceptual art. These results set the foundations for his singular visual language, perceptible no matter the media: collage, painting, sculpture, film or printed matter. At once critical and engaged, his practice emerged from or has been directly related to the protest movements of the times. Like his neighbours at the Frankfurt School, he was – and remains to this day – interested in mass culture and in propaganda methods. At the height of the Cold War, Bayrle’s work incorporated the very symbols that both capitalist and communist societies had been forging on either side of the Iron Curtain.

At the same decade, Bayrle was moved to create his first ‘super-images’: huge patterns composed from a multitude of tiny, identical patterns. Germany had rebuilt its economy during the so-called Wirtschaftswunder (economic miracle), and the new products that began to appear there in the post-War period invaded Bayrle’s universe: cans of condensed milk, bottles of concentrated Maggi stock, industrially produced fruits and vegetables, and so on.

This practice allowed Bayrle to critically merge the iconographies of communism, capitalism and fascism: for him, mass production in the West and the propaganda in the East were, paradoxically, visually similar. Drawing, collage, serigraphy, painted paper, the accumulation of objects – Bayrle avails himself of a variety of techniques to create works with a Pop look, but which are critical of consumer society and political indoctrination.

For Thomas Bayrle’s exhibition Economy-Projects purchased the Swiss domain www.wiels.ch. The website hosts an altered clone (copy) of www.wiels.org. Economy-Projects registered this website in Switzerland where the Bern Convention for the Protection of Literary and Artistic Works was signed. Wiels have been made aware of the concept however we operate with complete autonomy.

For his exhibition ‘wiels.ch’, all the layers and images of the original wiels.org website have been replaced – only the architecture of the website remains – Bayrle is exhibiting three videos. Each time a user clicks a web link on wiels.ch a video is randomly selected and a specially written ‘Java internet script’ puts that film in place of all the original web content being displayed.

The exhibition catalogue is a frame by frame representation of ‘Gun’ one of Thomas’s superstars videos in newsprint tabloid format.
www.dependance.be