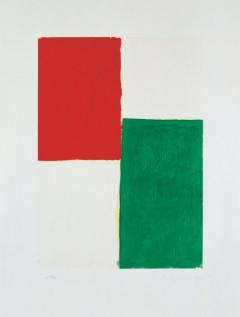 It is considered to be one of the most groundbreaking art-historical books of the 20th century: Wilhelm Worringer’s dissertation Abstraction and Empathy published in 1907. Worringer’s ideas not only changed academics’ view of art history, but also had a strong impact on young modern artists such as Vasily Kandinsky and Franz Marc. Inspired by Worringer’s theories, Carmen Giménez, Curator of Twentieth-Century Art at the Solomon R. Guggenheim Museum, New York, organized the exhibition Abstraction and Empathy, comprising works on paper from the Deutsche Bank Collection and important loans from the Solomon R. Guggenheim Museum, the Albers Foundation, and private collections. The show at the Deutsche Guggenheim engages with Worringer’s aesthetic, philosophical, psychological theories in a dialogic way. At the core of the exhibition are some 100 drawings, watercolors, and prints from the Deutsche Bank Collection which, in terms of Worringer’s dichotomy, have had a lasting influence on the reception of modern art up to the present day: works by Josef Albers, Michael Buthe, Blinky Palermo, and Thomas Schütte. They are augmented by a small selection of key loans – paintings by Philip Guston, Paul Klee, and Piet Mondrian.

The exhibition was inspired by two opposing tendencies which, according to Worringer, ran through the history of art from its origins through the 19th century. In his text, Worringer claims that in societies experiencing great anxiety and intense spirituality, such as those of ancient Egypt and medieval Europe, artistic production tends toward a flat, crystalline “abstraction,” while cultures geared toward science and the physical realm, like ancient Greece and Renaissance Italy, are dominated by more naturalistic styles, which he subsumed under the term “empathy.” Worringer’s book exclusively dealt with the past, completely ignoring contemporaneous artistic production. Yet his premise that a move towards abstraction is produced by “a great inner conflict between man and his surroundings” can be related to the zeitgeist of modern society. In the wake of its publication Abstraction and Empathy came to be regarded as fundamental for understanding the rise of Expressionism and the role of abstraction in the early 20th century.

The exhibition at the Deutsche Guggenheim brings together works that reflect the polarities of Abstraction and Empathy defined by Worringer in the altered art landscape of the second half of the 20th century. Abstract works by the Bauhaus teacher Josef Albers reduced to surface, color, and geometry are juxtaposed with works by Blinky Palermo in which Minimal Art approaches are combined with Russian Constructivist influences. Michael Buthe and Thomas Schütte, on the other hand, adopt more gestural, representational styles alluding to the presence of the human body and things, coming closer to Worringer’s concept of empathy. Selected paintings by Guston, Klee, and Mondrian additionally illustrate the lasting impact and importance of Worringer’s psychology of style.

The artists at the center of this show should be understood as individuals, working in unique contexts. Seen together through the lens of Worringer’s theories, however, their works gain new significance and provide a renewed assessment of Abstraction and Empathy in contemporary art.