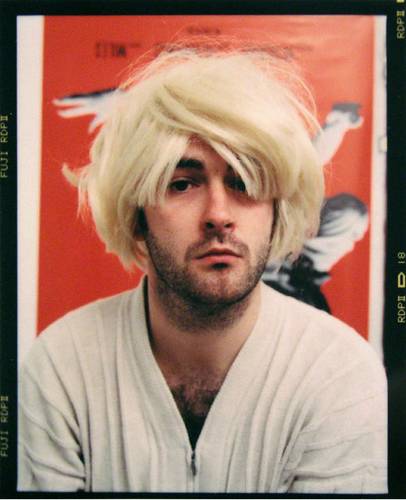 
The Deutsche Guggenheim presents Douglas Gordon’s The VANITY of Allegory, a self-portrait in the guise of a group exhibition, from July 16 to October 9, 2005. Scottish-born artist Douglas Gordon is an inveterate storyteller. The fictions that he weaves extend outward from the objects of his art — film, video, sound installations, photographs, and text works — to encompass his own artistic persona. Self-representation or, more accurately, Gordon’s staging of a mutable and enigmatic self, constitutes a significant component of his practice — a component that is largely performative and indirect. Conceived specifically for the Deutsche Guggenheim, The VANITY of Allegory explores the notion of the veiled self-portrait as an art-historical trope, a literary device, and a cinematic strategy while it examines the intersection of vanitas, as a meditation on the ephemeral nature of life itself, and self-representation as an act of vanity and a ploy to remain immortal.

For The VANITY of Allegory, Gordon turned to the histories of art and film for his source material, appropriating existing works as so many readymades with which to articulate his theme. His installation — which houses its own cinema — includes loans from the Guggenheim Museum and private collections, as well as examples of his own work and that of his peers. By combining historical and contemporary art and film, Gordon has created a visual collage that narrates issues of self-representation and double identity. The result is a folly, a playful mosaic of an exhibition, which reflects some of the more profound themes at the core of Gordon’s art: the temporality of life, the struggle between good and evil, and the dialectical relationship between opposites.

The exhibition is in and of itself a work of art in which Gordon conflates the egotistic
al search for perpetual recognition and the anxiety one experiences about the transience of life, suggesting that together they form the impulse behind artistic creativity. The endeavor begins with a signature — specifically, the inscription that Pietro Perugino painted on the arrow that pierces the neck of St. Sebastian (1493-94): “Petrus Perusinus pinxit”. The insertion of Perugino’s name into the painting sets off a chain of associations — from the fine line between violence and eroticism (the dart/name penetrates its subject) to the narcissism of the artist. Since Perugino was clearly proclaiming his authorship, Gordon read this painting as his veiled self-portrait of the artist, while recognizing Perugino’s strangely intimate relationship to the subject. In response to this work, Gordon has claimed that it is impossible to say where the allegory (about martyrdom, spiritual salvation, mortality) ends and vanity begins.

When Gordon includes his own image in a work, he is inevitably in disguise. In his photograph Self-Portrait as Kurt Cobain, as Andy Warhol, as Myra Hindley, as Marilyn Monroe (1996), he depicts himself wearing an ill-fitting blonde wig, constructing a multivalent identity that refuses to cohere around references to four tabloid personalities. In other words, it is an example of the artist inserting himself into an image via the guise of someone else, a performative transvestism that allows him to both expand upon and deflect the notion of a unitary self. It is no surprise, therefore, that Marcel Duchamp and Andy Warhol form the conceptual core of the exhibition — both of these artists fashioned elaborate public personae, which, one can argue, were as much a part of their art as their actual art objects. They each inserted themselves into their work, at times complicating their self-presentations by appearing in drag. Duchamp posed for Man Ray as his female alter ego Rrose Sélavy in 1920 and Warhol produced Polaroids of himself dressed in various feminine guises in 1980-82.

The exhibition traces the practice of self-representation, both veiled and explicit, through the work of such contemporary artists as Matthew Barney, Robert Gober, Roni Horn, Jeff Koons, and Robert Mapplethorpe. Other artworks in the exhibition, including those by Damien Hirst, Lawrence Weiner, and Cerith Wyn Evans, muse upon the transitory nature of life.

Film plays an important role in Gordon’s practice. He has worked with existing film as a readymade, often replicating and even inverting projections. For The VANITY of Allegory, Gordon has created a cinema within the exhibition space, which has been programmed with a selection of films to further illuminate the project’s themes, including The Legend of Leigh Bowery (Charles Atlas, 2002), Apocalypse Now Redux (Francis Ford Coppola, 2001), Peter Pan (Walt Disney, 1953), The Picture of Dorian Gray (Albert Lewin, 1945), and Dr. Jekyll and Mr. Hyde (Rouben Mamoulian, 1931).

The mirror also appears as a leitmotif in Gordon’s art. It is present as both a structural and metaphoric device through which he articulates the condition of doubling that is so essential to his work. For The VANITY of Allegory installation, Gordon has once again deployed the mirror as both a structural and symbolic device. One entire wall is mirrored, which visually doubles the gallery space. The effect is kaleidoscopic; viewers see themselves seeing the art, which in turn is twice seen. To amplify this optical duality, Gordon has created several pairings of works by the same artists (including Barney, Gober, Horn, and Gordon himself), which send reverberations across the installation — like informing like.

Douglas Gordon’s The VANITY of Allegory is organized by the artist in collaboration with Nancy Spector, Curator of Contemporary Art at the Solomon R. Guggenheim Museum in New York. The exhibition is accompanied by a catalogue with an essay by Nancy Spector and entries, written by Francis McKee, on each art work and film in the exhibition, explaining Gordon’s rationale for their inclusion (German or English, 35 Euro). As Edition No. 32 of the Deutsche Guggenheim Douglas Gordon has created 100 self-portrait Polaroids. Each work is a signed, unique artwork and is available exclusively at the MuseumsShop at a price of 400 Euro (including the catalogue).

Douglas Gordon’s The VANITY of Allegory is accompanied by several special events and lectures. In his talk I Are Others on 21 July 2005 at 7 p.m. Raimar Stange, critic and curator, reflects upon the transitory relationship between ”subject” and ”individual”, with quotations from Sören Kierkegaard, Wolfgang Welsch, Brian Holmes et al. as well as music by Velvet Underground, Madonna and Bob Dylan.

On 17 August 2005 at 8 p.m. there will be a special screening of the 16mm-films Scorpio Rising and Puce Moment by Kenneth Anger, accompanied by a talk by Francis McKee, an independent curator and contributor to the exhibition catalogue. In his lecture entitled Lucifer and the Honeybee McKee examines the genesis of the two films within Anger’s oeuvre and introduces a broader interpretation of the exhibition as a whole.

Persona and Phantasma – Mise en scène and Mise en abîme in Film is the title of a lecture by Gregor Stemmrich taking place on 15 September 2005 at 7 p.m. Stemmrich is a professor at the Hochschule für Bildende Künste in Dresden and will speak about the directing of actors, the utilizing of light, the handling of the camera and the special artistic device of the claimed identity between author and narrator.

For the 18th Long Night of the Museums on 27 August 2005, parallel to the exhibition the Deutsche Guggenheim will present “Myself as...”, a transformative performance with the visitors in the Atrium of the Deutsche Bank. In the cinema, located in the gallery space as part of the exhibition, there will also be special screenings of the films The Picture of Dorian Gray by Albert Lewin, (1945, 110 min, OL) at 8 p.m., Dr. Jekyll and Mr. Hyde by Rouben Mamoulian (1931, 92 min, OL) at 10 p.m. and Stanley Kubrick’s A Clockwork Orange (1971, 131 min, OLwS at 11.45 p.m. The exhibition will remain open on the Long Night of the Museums until 2 a.m.

A special focus of the supporting program is on the events offered to children and families. In addition to the traditional Family Brunch, which takes place at the Deutsche Guggenheim on Sunday, 11 September at 11:30 p.m., the museum will be running a special program for children between the ages of four and twelve. On 30 and 31 August and on 21 and 22 September 2005, each time at 4 p.m., little art lovers will have the opportunity to create their own self-portraits pursuing the question Who am I?. Free guided tours are offered daily at 6 p.m., and the well-known Lunch Lectures on Wednesdays at 1 p.m. and keynote tours on Sundays at 11.30 a.m. will round off the supporting program as usual.