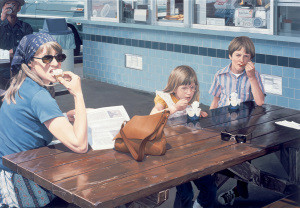 By the end of the 1960s, a number of young artists working in the United States had begun making large-scale realist paintings directly from photographs. With often meticulous detail, they portrayed the objects, places, and people that defined urban and suburban everyday life in America. In contrast to the Pop artists, they did not present their ubiquitous, often mundane, subject matter in a glamorized or ironic manner. They sought instead to achieve a great degree of objectivity and precision in the execution of their work in an effort to stay more or less faithful to the mechanically generated images that served as their source material. They developed various means of systematically translating photographic information onto canvas. In prioritizing the way the camera sees over the way the eye sees, they underscored the complexity of the relationship between the reproduction and the reproduced as well as the impact of photography on the perception of both daily life and reality in general.

A number of terms were proposed in quick succession to describe this novel approach to painting, chief among them Super-Realism, Hyperrealism, and Photorealism. The artists identified as Photorealists neither formed a coherent group nor considered themselves to be part of a movement, and a number of them actively challenged their association with the label. Nevertheless, in the late 1960s and 1970s, the seventeen artists in Picturing America: Photorealism in the 1970s—Robert Bechtle, Charles Bell, Tom Blackwell, Chuck Close, Robert Cottingham, Don Eddy, Richard Estes, Audrey Flack, Franz Gertsch, Ralph Goings, Ron Kleemann, Richard McLean, Malcolm Morley, Stephen Posen, John Salt, Ben Schonzeit, and Paul Staiger—were exploring a related set of issues, methods, and subjects that led critics, curators, and art historians to both exhibit and write about their work as a coherent trend in contemporary art. Picturing America focuses on this formative, defining period in the history of Photorealism.

The exhibition includes thirty-two paintings, a number of them the most iconic and masterful works of 1967–82, for example Richard Estes’s Telephone Booths (1967) and Chuck Close’s Leslie (1973). Picturing America is divided into four sections, three exploring key themes of Photorealist painting during the 1970s—Reflections on the City, Culture of Consumption, and American Life—and a fourth dedicated to a portfolio of ten lithographs made on the occasion of Documenta 5 in 1972, which featured the first major group showing of Photorealism.

Like the portfolio, this exhibition seeks to recognize Germany’s important role in the early history of Photorealism through the inclusion of a handful of paintings shown at Documenta 5 and a rich selection of works from the collection of Peter and Irene Ludwig, who by 1970 began sharing their Photorealist holdings with the public at the Neue Galerie der Stadt Aachen. In the years immediately following Documenta 5, a number of galleries and museums in Germany organized exhibitions of the leading artists associated with Photorealism. Since that time, there has not been a major presentation in Germany. Nearly thirty years later, Picturing America: Photorealism in the 1970s seeks to recover this historically significant point of connection between this American art and Germany.
www.deutsche-guggenheim.de