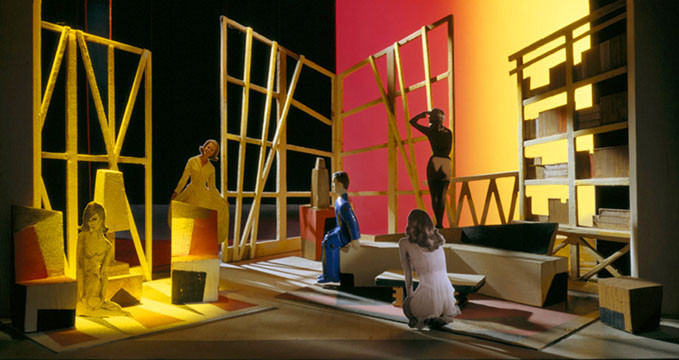 Laurie Simmons comes back to Madrid with a new exhibition of recent work and for the showing of her first film. Photographs from the series The Boxes (Ardis Vinklers) will be shown in Galeria Distrito Cu4tro and at the same time her first film The Music of Regret will have its Spanish premiere in Espacio Distrito Cu4tro. The Music of Regret is a minimusical in three acts, each act relating to a different period of her artistic life, in which the American actress Meryl Streep has a role.
The title The Boxes (Ardis Vinklers) refers to a Latvian artist Ardis Vinklers and his three light boxes which Laurie Simmons discovered in an antiques fair. The new series of photographs continues the theme which this artist has been developing for some time, creating scenarios in which appear various of the figures she has constructed. The original paintings of Vinklers set in a dance hall, a bookshop and an art gallery, are combined into her own aesthetic to create her imaginary narratives. Simmons places figures in furnished rooms, using pictures of sophisticated women cut out from various magazines, and one male figure, a doll. The scenes thus constructed are seductive and disturbing, evocative and mysterious, in the way that the figures have no contact with one another, so a strong sense of dislocation and solitude is produced. She also photographs the boxes on their own, empty of their figures, using light and shadow to create silent, austere architectural portraits.
For more than 25 years, in photographs which combine humour and pathos, Laurie Simmons has exploited apparently outdated sexual stereotypes which continue to operate below the surface of contemporary life. With the incorporation of puppets and costumes her inanimate images have always had their own particular stamp – especially her series of walking objects, where the legs of the women are adorned with objects out of all proportion such as a house, a revolver or a book. The Dada artist Tristan Tzara wrote that “Objects dream and speak when they sleep” and that is exactly what happens in the work of Laurie Simmons . For years these inanimate objects have been dreaming, clearly the case in the series mentioned above, and this is what made her iconic images famous in the eighties. In the nineties she turned her camera on male ventriloquist dolls, adding scenes in Photoshop from their everyday dreams.
Born in New York in 1949, Laurie Simmons has, since her first one man show in Artists Space in 1979, taken part in numerous international exhibitions all over the world. In 1997 the Baltimore Museum of Art organised a twenty year retrospective of her work entitled The Music of Regret, of which included 150 photographs. In 2005 she won the Roy Lichtenstein Residency in Visual Arts at the American Academy in Rome. As well as the showing of her film in MOMA in New York and at the TATE MODERN in London, it was also seen at The Nassau County Museum of Art, Roslyn, New York. The same week it opens in Distrito Cu4tro, the film will be shown in the Ludwig Museum in Cologne, on the 18th of October.
The Boxes (Ardis Vinklers) will be exhibited in Galería Distrito Cu4tro [Bárbara de Braganza, 2], from 17th October to 23rd November. In the same dates, the film The Music of Regret will be shown in Espacio Distrito Cu4tro [Conde de Xiquena, 9 – bajo derecha], from 6.30 pm to 8 pm (2 daily showings).
www.distrito4.com