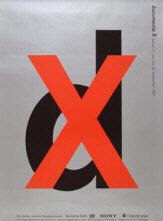 In 1997, Catherine David was the first women to be appointed artistic director of a documenta – the last before our transition to the new millennium. This led David to use as a central motif the idea of “looking back into the future”. She presented a critical review of the past fifty years, and simultaneously a prognosis of the future for which David saw no traditional precedent on how we should proceed. To describe her approach , the artistic director coined the term “retroperspective”, which also was used in her exhibition design. David's mission was to place dX in relation to its predecessors, but also in the “tradition of innovation” that was the starting point of every documenta. A further theoretical concept underlying dX was the consideration that aesthetic production should also incorporate its political environment in the broadest sense of the word. David wanted to enable people to “recognize the state of the world” in varying ways, a desire which prompted her to define dX as a “manifestation culturelle.” Certain key political dates for wide-reaching social and cultural upheavals, such as 1945, 1968 or 1976/77, became chronological markers, along which art's political, social, cultural and aesthetic exploratory functions were traced.

With this concept in mind, David devoted most attention to those critical artistic positions that evolved at the end of the 1960s and the beginning of the 1970s. For instance, in an explicit reference to documenta 5, Marcel Broodthaers' “Section Publicité, Musée d'Art Moderne, Départment des Aigles” was shown again, which had already been on show in Kassel in 1972. Additional large-scale work complexes by Michelangelo Pistoletto, Brazilian artists Helio Oiticica and Lygia Clark, Dutch architect Aldo van Eyck or the “Atlas” by Gerhard Richter were produced around that time or were begun during this period. In addition to historical works, lines of development were traced into the present-day.

It was likewise part of David's concept to expand the exhibition's traditional spectrum, and go beyond the mere presentation and displaying of works of art. Accordingly, the discussion forum „100 days – 100 guests“ became an integral part of dX. It afforded a platform for presentations and discussions by artists, scholars, scientists, authors and architects on questions pertaining to art and society – ranging from topics such as the efficacy of cultural policies uder the conditions of a world market to questions on the foundations of democracy. Speakers invited included the artistic director of the coming documenta, Okwui Enwezor.