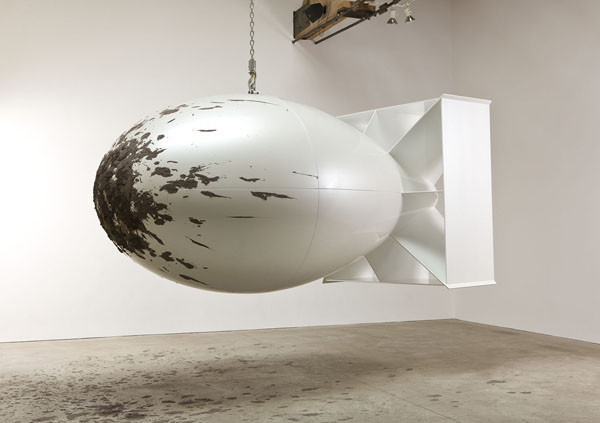 The Donald Young Gallery is pleased to announce an exhibition of new work by Iñigo Manglano-Ovalle. Produced specially for this show, Dirty Bomb, 2008 is a full-scale rendition of the infamous Fatman bomb dropped on Nagasaki in 1945. Fashioned in the fetishized material of sports cars, its lustrous white enamel finish has been lovingly polished and buffed -- only to be ignominiously spattered in mud by the artist himself.
The soiled Dirty Bomb humorously echoes the strategic moves made by Manglano-Ovalle in his installation for Documenta XII, Phantom Truck , 2007. Phantom Truck is a to-scale reproduction of the mobile biological weapons lab presented by former U.S. Secretary of State Colin Powell to the U.N. Security Council as evidence of the Iraqi government's possession and active production of Weapons of Mass Destruction. Working painstakingly from the virtual images of Powell's PowerPoint slides, Manglano-Ovalle fabricated the lab, itself a 'fabrication', only to hide it in a darkened space. Dirty Bomb inverts the gesture of the Real; while the truck was a fake object fabricated to be real, only to be hidden again, the bomb is a real object presented as a fetishized version of itself. Both pieces, however, demonstrate the artist's interests in the ethical dilemma of aesthetics. The artist argues, "What's beautiful and what's monstrous, or are they so intertwined you can't locate either one of them? When I make a beautiful cloud, I still want people to think of a nuclear explosion."
A second new work, Roost, 2008, plays with these same strategies. In Roost , a geodesic sphere, the very image of better living through engineering, is jerry-rigged as a bricolage assembly of tubes, bungie cords and rubberbands to become the cage for a pet rooster. One wonders if Buckminster Fuller, mascot of a certain brand of optimistic modernism, would be as perplexed as the rooster is in his new home, where every link in the system becomes a potential perch.
Finally, Manglano-Ovalle exhibits Juggernaut, 2007, a video work filmed in the Vizcaino Biosphere Reserve in Baja Sur, Mexico, the site of the mating ground for the endangered grey whale. Instead of focusing his lens on the undeniably awesome image of the grey whale, Manglano-Ovalle turns his back on these 'monsters' of the deep (now the objects of our belated protection), and focuses, instead, on the behemoths of our own making -- the neighboring salt-works, jointly owned and operated by ESSA of Mexico and the Mitsubishi International Corporation of Japan. Set in this un-locatable, alien landscape Juggernaut is, in a sense, nothing more than an establishing shot for a nature film set in an unnatural landscape. But, rather than setting the scene for an informational documentary or a fictive narrative, the shot 'breaks loose' and begins to track the distant, salt-encrusted horizon, occasionally obstructed by the repeated arrival of an impossibly long, improbably enormous chain of salt mining vehicles.
This marks Iñigo Manglano-Ovalle's first solo exhibition with the Donald Young Gallery. Recent projects include Human/Nature: Artists Respond to a Changing Planet at the Museum of Contemporary Art, San Diego, as well as one-person shows with the Wexner Center, the Henry Art Gallery, The Art Institute of Chicago, Museo de Arte Contemporaneo de Monterrey, Mexico, and a traveling exhibition organized by the Cranbrook Art Museum. Manglano-Ovalle's work was included at Documenta XII in 2007 and the 2004 Liverpool Biennial. The artist is the recipient of the Richard H. Driehaus Foundation's Individual Artist Award, 2008, and the John D. and Catherine T. MacArthur Fellowship, 2001.
www.donaldyoung.com