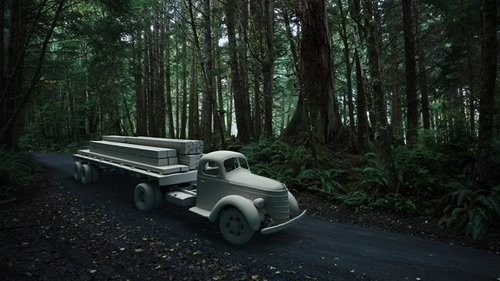 The Donald Young Gallery is pleased to present its fourth solo exhibition with Joshua Mosley, the artist's first new work since the premiere of dread at the Venice Biennale in 2007.

International is a two-part installation incorporating a five and a half minute mixed media animation and three bronze sculptures. The animation is inspired by oral history recordings captured between 1968 and 1978 of George R. Brown, the American industrialist, entrepreneur and philanthropist, and Friedrich Hayek, the Austrian economist and philosopher. Although the two men never met, Mosley folds together a conversation that identifies their perspectives on how the ideal economic and social order for a nation should evolve. From a contemporary perspective, the conversation also reveals how it is possible for the mind to simultaneously hold incompatible ideas and how individuals like Hayek and Brown use logic to reconcile public theories and actions with more personal motivations.

The animation presents cycles of photographs taken in locations pivotal in the lives of Hayek and Brown. For Hayek we see the Hôtel du Parc in Mont Pelerin, Switzerland which was the location of the first Mont Pelerin Society meeting in 1947 coordinated by Hayek. For Brown we see a triangular plot of land at the confluence of the Green Bayou and Houston Ship Channel in Texas that was purchased by Brown's company in 1941 to complete a series of federal contracts to build ships for WWII. Together with these landscapes are images of old logging roads along the coast of Oregon composited with an animated 3D scan of a 1937 International D-50 flat bed truck hauling lumber. Interwoven with Hayek's and Brown's voices is a musical score composed by Mosley of single notes played on a 1938 Haines Brothers piano, matched to the piano owned by Brown's family during this period of growth in their business.

The sculptures are a 34-inch long replica of a 1937 International brand truck, which Mosley hand made from wood, metal and resin and then cast in bronze together with portraits of Brown and Hayek that were hand-sculpted in clay and rendered in bronze. Unlike Mosley's previous works combining sculpture and animation, in International, although the truck is present both as a sculpture and a moving image, we only hear the voices of Brown and Hayek.

Joshua Mosley is Associate Professor of Fine Arts in the School of Design at the University of Pennsylvania and was the recipient of the 2006 Joseph H. Hazen Rome Prize Fellowship at the American Academy in Rome. His work has been included in exhibitions at the Venice Biennale (2007), Museum für Gegenwartskunst, Basel (2003), The Museum of Modern Art of Fort Worth (2008) and the Museum of Contemporary Art San Diego (2008). Mosley's work is currently the subject of a one-person exhibition at the Indianapolis Art Museum through August 29 th and this summer the Philadelphia Museum of Art will present International from June 29 th – July 25 th .
www.donaldyoung.com