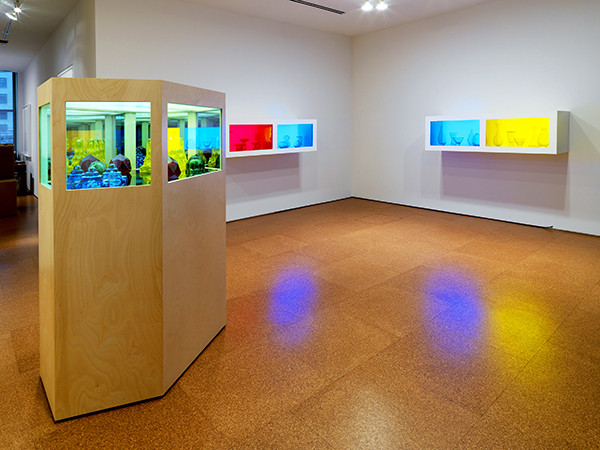 Donald Young Gallery is pleased to announce an exhibition of new work by Josiah McElheny.
This exhibition presents altered, re-imagined visualizations of historic visionary architectural projects, together with colorized depictions of the aesthetic history of the twentieth century. Four new sculptural works and two drawings on silver gelatin photographs represent the next stage in a series of exhibitions, books, film and performance that re-examine a mostly forgotten aspect of twentiethcentury modernism. Together they propose a series of multi-colored, subjective perspectives for re-thinking the possibilities around utopian aesthetics and its ideological legacies.
The exhibition’s centerpiece, Crystalline Landscape After Hablik and Luckhardt I(2010), is a sculpture-as-model that provides a kaleidoscopic vision of a citylandscape built out of colored, fractured, crystalline forms. The six-sided freestanding sculpture is electrically-lit and clad in a seamless plywood surface; six windows of two-way mirror look into a twisting, mutable and horizon-less landscape. The environment within consists of a series of scale models of buildings based on drawings by architects Wenzel Hablik and Wassili Luckhardt from 1919-1921; the drawings were translated into three-dimensional metal molds in order to shape the colored glass into rough-hewn structures for a crystalline architecture. Part of the post-WWI explorations of a group of architects that included Walter Gropius, Hablik and Luckhardt’s work represented a never-built alternative to the modernism that prized the grid and efficiency. In this work, McElheny expands the picture of what this might look like, emphasizing the hopefulness that might come from complexity, diversity, or a multitude of approaches.
In three wall-mounted sculptures, McElheny offers a comparison of the variability and individuality present within modernism by pairing two groups of reinterpreted twentieth-century design objects bathed in colored light. In one sculpture, Blue Italian Modernism and Red Finnish Modernism (2010), red reconstructions of Finnish designs are paired with blue versions of Italian designs. Similarly in Red Finnish Modernism and Yellow Czech Modernism(2010) and Yellow Czech Modernism and Blue Italian Modernism (2010), the two colored bays— specially constructed to create an environment of intensely colored light—visually blend object and space together. The use of glass filters lighting effects and the colored glass objects— made with a special technique to achieve a high level of tonal consistency, are used to suggest that history and perspective can be remade simply by altering the context.
The exhibition opens with two drawings on silver gelatin photographs entitled Bruno Taut on Mies van der Rohe (1922) II, Bruno Taut on Mies van der Rohe (1922) IV. Referring to the rivalry between the two architects, these drawings celebrate the vision that lost the argument, namely the socialist and spiritual architecture that Taut, Hablik and Luckhardt believed in. Using various photographs that Mies took of his skyscraper model in 1922, McElheny colorfully defaces the black and white images with photo-retouching pencils: Taut’s multicolored visions are overlaid on Miesʼs picture of purity and transparency.
Josiah McElheny lives and works in New York. McElheny has been working with Donald Young Gallery since 1993 and this is his eighth solo exhibition with the gallery. He has exhibited widely including recent solo museum projects at the The Museo Nacional Centro de Arte Reina Sofía, Madrid (2009), Henry Art Gallery, Seattle (2008), Moderna Museet, Stockholm (2007), and MoMA, New York (2007).
Recent books include, “A Space for an Island Universe”, published by the Museo Nacional Centro de Arte Reina Sofía and Turner Publications (2009), “Prism”, a significant monograph published by Rizzoli (2010) and “The Light Club”, an artist’s book published by the University of Chicago (2010). There will be an Artist’s talk on November 15, 2010 at the University of Chicago for “The Light Club” at 4:30pm followed by a book signing at 5:45pm at the CochraneWoods Art Center, 5540 South Greenwood Avenue, Room 157.
www.donaldyoung.com