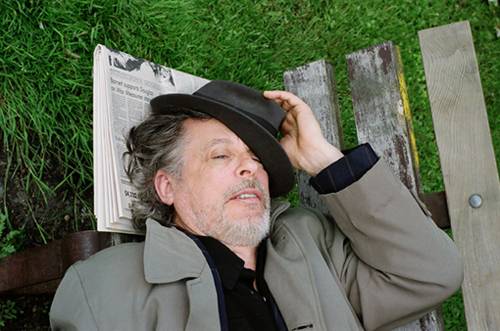 Donald Young Gallery is pleased to announce an exhibition of new work by Rodney Graham.

The new film Lobbing Potatoes at a Gong is inspired by an anecdote that describes the drummer of the rock band Pink Floyd lobbing vegetables at a gong during a long jam in London in the sixties. In the film, Graham has re-enacted this performance and has contextualized it as a fictional fluxus event. Taking as his fashion icon the artist Dan Graham, Rodney Graham's costume represents what he might have worn had he been a New York artist at the time (plaid shirt, jeans, and Red Wing work boots). The ten-minute performance is documented in Super 16mm by a single hand-held camera. All the potatoes that struck the gong were subsequently fermented and distilled into vodka. A bottle of that vodka appears in this exhibition, bearing a hand-typed label consistent with a 'concrete poetry' aesthetic of the period.

In several other works the artist also projects himself back in time in a sense, providing a 'back story' of a hypothetical artistic development. For example, the new triptych lightbox Three Musicians (Members of the Early Music Group "Renaissance Fare" performing Matteo of Perugia's 'le Greygnour Bien' at the Unitarian Church of Vancouver, Late September, 1977) is inspired by a 1970's David Munrow Consort recording of a famously 'modern' atonal sounding work of the late 14 th century avante garde by the Italian composer Matteo of Perugia. Rodney Graham: " It occurred to me that it would be interesting to look back on an earlier era: that is, to represent musicians of the seventies (the golden era of the early music revival, I think) approaching an artefact of the fourteenth century, and this musical artefact in turn exhibits in its strange atonality a curious pre-echo of twentieth century experimental music." The nature of the musical composition itself is what has inspired the triptych format. The work is scored for three instruments (here vielle, tenor recorder and lute) and the relation between the voices is such that each musician seems to be in his or her own 'space' for much of its duration. Modern commentators have referred to its similarity to free jazz in that respect. Each individual musician is represented, but the entire piece works in a coherent renaissance perspective; it was shot from a single point of view, with the negative divided into three pictures later. The performance space is a modernist church of the early sixties, and the costumes worn by the musicians attempt to replicate the sort of rudimentary homemade outfits favored by some family consorts of the seventies.

The Awakening double image was also musically inspired. It is based on a publicity photo of the band Black Sabbath from 1970-71. The original photo by the rock photographer Chris Walter shows the band in a pathway in a park, standing around a reclining older man on a park bench--perhaps a tramp--at whom Ozzy Osbourne is pointing with a mocking gesture. The other members of the band are looking at the camera and laughing. Rodney Graham has inserted himself in the position of the reclining man partly as an ironic reference to his own rock and roll aspirations: "I began performing rock rather late in life and I liked the image of a group of young metal heads laughing at me." The image also evokes something of the spirit of Carravagio's Calling of St. Matthew. Perhaps the artist is being 'called' to the vocation of rock by a passing group of Sabbath look-alikes. Also in terms of religion, the title Awakening should be considered in the context of the heavy metal crosses which Ozzy and Tony Iommi wear around their necks: they are born again rockers. The image has been reversed left to right and has been split into a diptych. The 'negative' version of the work (which is intended to evoke the use of negative images in heavy metal album covers) returns the image to the left/right orientation of the original Chris Walter photograph.

Album covers inspired both Artist in His Studio and Paradoxical Western Scene . The former was influenced by the 1960's American roots rock and psychedelic rock group Moby Grape. The first-edition cover of their eponymous debut showed the group with rhythm guitarist Peter Lewis in the center holding a spoon and extending his middle finger over a washboard. Country singer Marty Robbins' album 'More Gunfighter Ballads' inspired the cowboy image in Paradoxical Western Scene . The cover shows Robbins in cowboy garb squatting at the foot of a tree on which a "Wanted" poster is nailed. The poster shows an image of Robbins in the same outfit, creating a series of cascading, nested images of the same thing. This image also references a photo piece of the sixties by Michael Snow, which explores mirrored paradoxes of infinite regress.

Rodney Graham was born in Vancouver in 1949 and his work has been exhibited internationally for over twenty years. A major exhibition of his new work is currently on view at the Museum of Contemporary Art, Montreal. Rodney Graham was the recipient of the 2006 Kurt Schwitters Award, and is currently being honored with an exhibition at the Sprengel Museum in Hanover, Germany. In 2004, a mid career retrospective of his work traveled to the Art Gallery of Ontario, Toronto, the Vancouver Art Gallery, Vancouver, British Columbia, the Los Angeles Museum of Contemporary Art, and the Institute for Contemporary Art in Philadelphia. Graham's work can be seen in the collections of major institutions such as the Museum of Modern Art, New York, the Centre Georges Pompidou, Paris, and the Metropolitan Museum of Art.