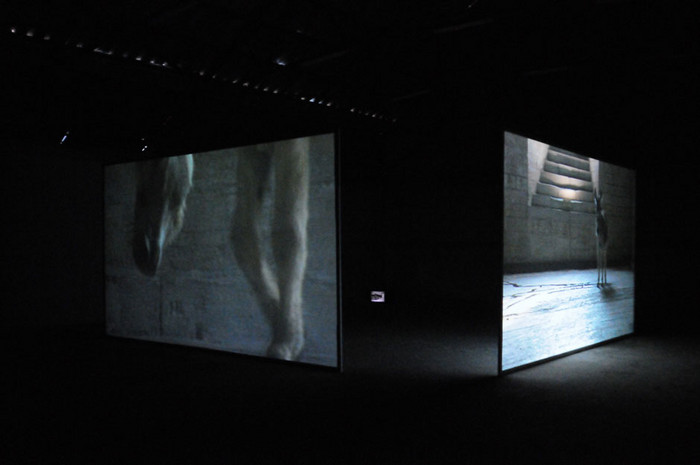 Exhibition view
Dvir Gallery is pleased to announce the opening of its new space in the Jaffa Port with a one-man-show by artist Douglas Gordon. The show also extends to the gallery’s existing space on 11 Nahum Street, in the north of Tel Aviv.

Gordon has previously participated in shows at the gallery, beginning with a one-man-show in 1998, and most recently with the 2008 group show Mes Amis, together with artists Adel Abdessemed and Lawrence Weiner.

A prominent artist in the international art scene, Gordon has won a number of prizes, among them the Turner Prize in 1996, the Hugo Boss Prize in 1998, and recently the prestigious Haftmann Prize.

For his current show at Dvir Gallery’s new space, Gordon will present a selection of the large-scale video projections made for his 2008 retrospective in Avignon. Inspired by the city’s rich medieval history and the monumental architecture of its Palais des Papes, Gordon created a series of video projections featuring animals such as donkeys, snakes, and peacocks. The artist received special permission to shoot the series within the palace’s grand chapel, where it was also consequently shown.

As an artist dealing with the representation of the duality between good and evil, Gordon picked animals that typically appear in fables as well as some biblical stories, and are recurrent images in art history.

The installation was especially adapted to the gallery’s spacious new site (300 SQM and 7 m tall).
www.dvirgallery.com