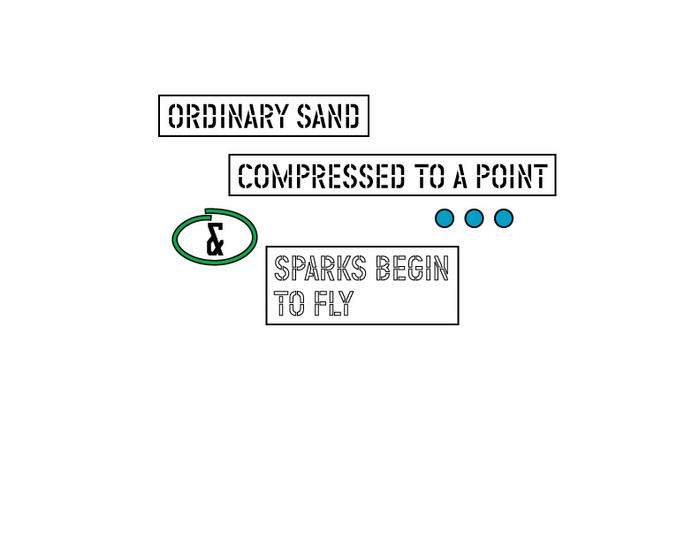 Lawrence Weiner, Ordinary Sand Compressed to a Point & Sparks Begin to Fly, Vinyl wall text, 2008
Dvir Gallery is happy to announce the opening of a joint exhibition for Lawrence Weiner, Douglas Gordon, and Adel Abdessemed. The exhibition is based on the friendship between the three artists, and its name was taken from the novel by Emmanuel Bove, "Mes amis", translated into Hebrew by the Me'orer publishing house.

Lawrence Weiner, born USA 1942, has established himself as one of the important and influential artists of Conceptual Art. A retrospective of his work was exhibited at the Whitney last year, and had traveled to LA MOCA, where it is currently on view.

Douglas Gordon, born in Glasgow, 1966, is a graduate of the Slade School of Art and winner of the Turner Prize in 1996. Gordon had exhibited solo show in worldwide venues, and had participated in many group shows, among which the Venice Biennale and the sculpture project in Munster.

Adel Abdessemed, born Algeria 1971, is one of the most prominent young artists these days, and in the last year had exhibited solo shows at Magasin (Grenoble), PS1 in New York, and the San Fransisco Art Institute.

All three artists will exhibit works created especially for this exhibition and for Dvir Gallery's space.
www.dvirgallery.com