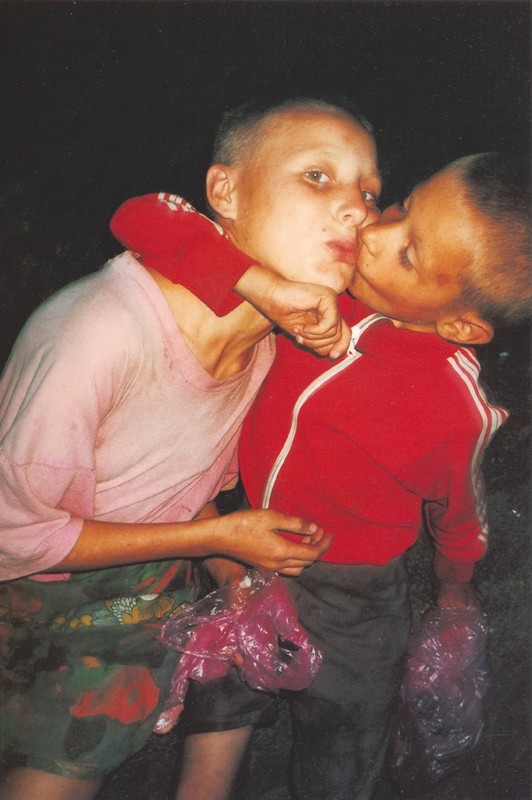 Boris Mikhailov, born in 1938 in Kharkov, Ukraine lives and works in the Ukraine and in Berlin. The exhibition of portraits illustrated in Case History documents Mikhailov's perception of social disintegration ensuing from the break-up of the Soviet Union – both in terms of social structures and the resulting human condition. Case History documents the social oppression, the devastating poverty, the harshness and helplessness of everyday life in post-communist Russia.

“First, these were the people who had recently lost their homes. According to their position they were already the Bomzhes ("bomzh" = the homeless without any social support), according to outlook they were simply the people who got into trouble. Now they are becoming the Bomzhes with their own class psychology and "clan" Futures. For me it was very important that I took their photos when they were still like "normal" people. I made a book about the people who got into trouble but didn’t manage to harden so far.
..... I suddenly felt that many people were going to die at that place. And the Bomhzhes had to die in the first rank, like heroes – as if their lives protected the others' lives. And I took the pictures displaying naked people with their things in hands like people going to gas chambers”.

"... My paintings are essentially similar to one another. There are minor changes and the same motifs recur time and again. The key figure is the little girl. She is seen walking, dancing, she is queen. Birds, flowers and butterflies distract her attention and irritate her. They are depicted in simplified lines, assuming different colors and variations.
The paintings are a story; a story with no plot, which unfolds through the minor variations occurring between one painting and the next in an endless chain. The girl keeps walking...
The painting process resembles that of writing a diary. To me, the girl figure could stand for just anyone, and as such she transmits something that is essentially mine..."

Orna Bromberg (b. Tel Aviv, 1955). She showed her first solo exhibition at the Dvir Gallery, 1985, followed by further exhibitions at the gallery over the years. She participated in group exhibitions at the Eretz Israel Museum, the Haifa Museum, and the Tel Aviv Museum, among others.
www.dvirgallery.com