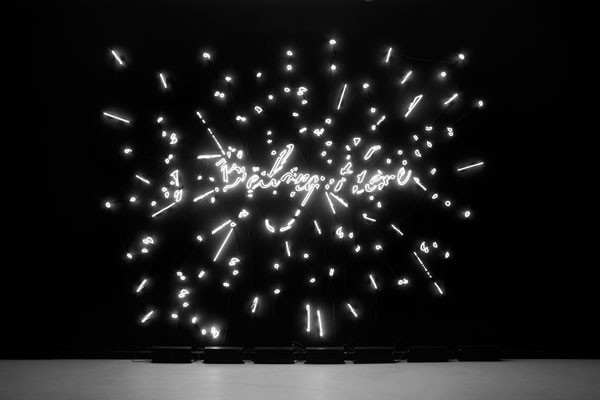 Tavares Strachan, is a New York Based contemporary conceptual artist whose multi-media installations investigate science, history and mythology. In his premiere showing in Israel, the artist will present the latest in a series of "exploded" text works in neon. Titled "Here and Now," the show consiststs of three phrases arranged in sprawling formations of fragmented neon light installed against black backdrops that simulate the void of outer space. Focused on the idea of belonging, the phrases evoke an existential, political and personal context.

* Following the current events in Israel, Tavares Strachan has decided to change the configuration of his upcoming show at the gallery.
Instead of hanging the whole show simultaneously, it will be divided into three parts which will be presented one week at a time, coming to a conclusion in the third week of the show and continuing to be presented for the remaining two weeks.
The visitors are invited to come several times and to see the evolution of the show.
www.dvirgallery.com