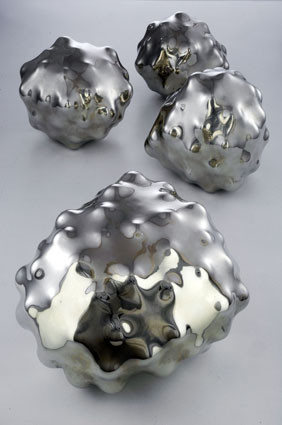 sieben100millionen, 2008
relief
acrylic resin bonded mineral-pouder
Ø 310 cm
The term ‚tired light’ which Carsten Nicolai has chosen as the title for his exhibition at Galerie EIGEN + ART Berlin comes originally from cosmology. Based on the phenomenon of the redshift of light it describes a possible theory to explain the origin of the universe.
Besides the theory concerning the redshift of light by Edwin Hubble, which initiated the big bang theory, Fritz Zwicky also developed an alternative interpretation of this lightphenomenon in the year 1929. Hence light looses energy in proportion to the covered distance – it becomes ‚tired’. In the meantime due to the course of the theory of relativity the ‚tired light’ theory had been abandoned in favour of the expansion of space-time. For Carsten Nicolai the examination of the phenomenon of the ‚tired light’ was the result of an encounter with the scientist Otte E. Rössler who is still working on this theory. Because of its simplicity, the theory has a strong fascination for Rössler and it is holding interesting philosophical implications.
The works of the since 2007 emerging series ‚tired light’ by Carsten Nicolai are going back to the explanation of the redshift of light with the ‚tired light’ theory. The plates are no literal elaboration of the term ‚tired light’ but in the modulation of yellow surfaces they are forming a more aesthetic view on the phenomenon. They allow an artistic perspective of the question about archetypes and their relevancefor explaining the world whereas for Carsten Nicolai it is less about the visualisation of the ‚tired light’ theory. In fact the poetry of the term is advancing and the redshift of light as a problem of perception is being analised artistically. Carsten Nicolai transfigures the ‚tired light’ theory and thus challenges the fascination for colours and light.
The sculptural series ‚cluster’ (2008) refers to an experiment by the American architect Buckminster Fuller about the sphere packing in space. The ‚Kepler conjecture’ deals with the maximum density of differently arranged three-dimensional layers of globes.
Referring to this the sculptures which Nicolai casted in nickel silver emerge from a simple design principle – ballons filled with table tennis balls reflect the test set-up. Thus the outer appearance of the sculptures is affected by the adjustment of the globes in the inside. The changing force effect of the outside allows a high number of variation in the form. Not the outer result of the emerging is focused by Carsten Nicolai but the adopted design principle with its artistic capability.
The exhibition is framed by a ‚tired light box’ which emits red light and puts the whole room in an atmosphere so that the two classical media sculpture and panel are unified in one space installation.
www.eigen-art.com