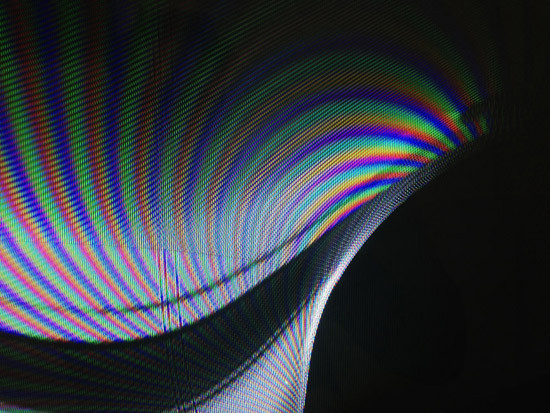 The inspiration for Carsten Nicolai’s work crt mgn goes back to an event in 2007, in honour of Nam June Paik shortly after his death, at the Watari-Um Museum of Contemporary Art Tokyo. At that time, the Watari family and Ryuichi Sakamoto invited artists to a collaborative performance commemorating Paik. In this context, during a short solo-performance, Nicolai experimented with the idea of a distorted TV image, which Paik used in his work Magnet TV, 1965. The work was re-performed in Paris at Fondation Cartier in 2012.

For the exhibition at Galerie EIGEN + ART Nicolai modifies this performance as an installation called crt mgn.

Four neon tubes are mounted parallel to one another and aligned horizontally at the head wall of the gallery. Their light is recorded by a video camera and transmitted on a TV screen. The televison image is distorted by a magnet attached to a pendulum, which hangs on a aluminium support and moves unregularly above the television screen.

Additionally the swinging magnet induces electricity in an electric coil. The corresponding fluctuations of the magnetic field produce modulations within the electric circuit that are transformed into acoustic signals audible during the exhibition.

The magnet field of the televison is influenced in a way that causes the image to shift and distort colours and shape. Some of the images have been documented and will be presented on duratrans in light boxes. They are the beginning of a potentially endless picture archive of form and colour with the title crt mgn pict.

The exhibition's title is corresponding to the cathode ray tube (crt) and the influencing magnet (mgn), the basis of this installation.
www.eigen-art.com