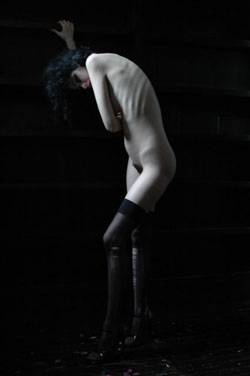 Martin Eder presents in his solo-exhibition „Die Armen“ for the first time a cycle of large-sized photographies. Photography is a subject the artist has argued intensively with and now finally presents as an independent work.
On the basis of installation and painting the photography is a consequence of the artists work which freezes the performance - the „tableaux vivant“ - as a conscious production in a kind of „memento mori“. The compression, which in this snapshot appears at the surface, Martin Eder describes in own words as „glassy sharp-edgedness that reduces the picture to the substantial“.
The production of the bodies in front of a black background set in the light, whereby the color in the photography solely results from light, shows the latent threat and in addition, the strength of its protagonists as well.
The aesthetics, which Martin Eder consciously works with in these photographies, is at the same time also the disclosure of a restrained act of violence, the masochism and the restlessness of the ordinary, which makes it way up to the surface. In his work there is the familiar correlation between the longing after beauty and that simultaneous analysis: What is beautiful?
By the purity of this very colorreduced large sizes and the detachment of the background, the line between portrait and act blurs. What we get to see here, works like a characterisations of soul-landscapes.
The viewer formally slips into the picture and feels the manneristic increased height of the figure and the exposure of her fears and fragility. Martin Eder succeeds in letting his protagonists speak for themselves, as if they become more than a bare act, like an embodiment of an obsession.
Martin Eders interest refers to the cycle of development and destruction, a constant process, to which already George Bataille lent expression in the literature.
„Cette obsession, _et malgré les lois par lesquelles _l'homme organise sa société,_se manifeste dans la mort & la sexualité, deux pôles contradictoires avec la vie sociale, sur lesquels pèsent tabous & interdits.“ ** This obsession, despite the laws by which human organizes his society, manifests in death & in sexuality, two poles in contradiction with the social life, on which taboos & prohibitions bear upon.