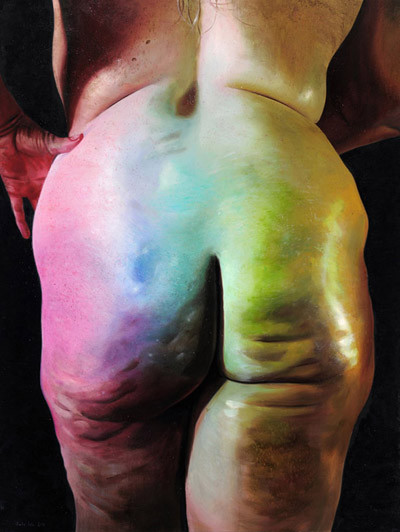 In evolution, the word asymmetry is associated with chaos and mutation. The imbalance creates agitation and expels anything from the common pattern. This almost abnormal condition is also inherent of the power for change, the departure.

During the last months, Martin Eder has created a block of work which is composed by new figured abstract sculptures made of aluminium, accompanied by ten canvases and works on paper. An extract of this block is now shown at Galerie EIGEN+ART in Berlin.

For a long time, Martin Eder's work was to be read as a coded irony, a melancholic intermediary stage in the cosmos of New Objecivity, sharp, cynic anti-attitude, contemporary figurative painting and installation. He is concerned with the issues of metaphysics: The quest for the cognition of the underlying structure and the principles of reality. What is crucial for man's being? Being is something, where all things agree and at the same time disagree with each other. In this case the antonym of being is the void, as nothing can be beyond the being.

Six bizarrely perforated objects made of aluminium with a quicksilverish-mirrored surface are arranged on pedestals spread over a black monolith, standing in the front room of the gallery. The almost liquid metal has frozen into life-sized snapshots, equal to a deliriously seeming transformational process in a raging mechanism of adjustment. The eerily hole portraits are trapped in their own transit. We can see shimmering air bubbles with empty eye sockets somewhere between Robocop and anatomic theatre.

The life-sized oak wood torso of a very slim nude is floating with closed eyes on a glass plate in the rear exhibition space. The realistic sculptural portrait of the female figure is almost entirely cut trough by a transection through the spine, which is sealed with skin-coloured wax. Morbidly ethereal, the fatally injured lies in a deep permanent sleep, dissolving on her cold base. Her delicate arm and back deform as if the body started to melt away.

After the realistic oil paintings of the last exhibition UGLY, showing balefully candied naked women with slimy iridescent skin and wispy kittens, the tableau is now acceded by large-scale gray-greenish worn-out bodies "with the complexion of the underbelly of dead fish", as the artist says himself. Coquettishly and out of joint, a rainbow coloured butt presents itself as a slimy shimmering counterdraft to media role models, and lost diet competitions and never-ending castings. In the paintings it is not the beautiful who dream through the cosmos, but realistic bodies bearing the marks of life. Bodies with all their wrinkles and dimples, their straggly hair and damaged nail polish. The female protagonists are taken from Martin Eder's oeuvre of nude photography which he has worked on since 2003 as atlas, diary and documentation. (cf. catalogue: Die Armen, Prestel). Their space odyssey takes place – although only in a small scale - underneath the stars of a solarium's wallpaper.

"In the face of man there is an infinite entanglement of dodges and evasions that correspond to the mind's traffic on which everything rests upon. One does not think of ascribing life to the simplicity of the sun, anymore. However, everyone of us carries this simplicity within himself: he forgets about it to the benefit of an entanglement in accidental events which are dependent from the tight-fisted anxiousness of the self."