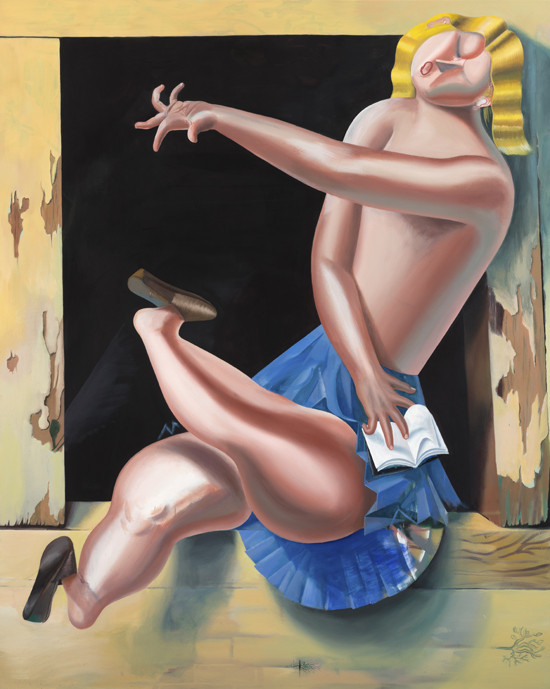 The exhibitions will open weekly from Tuesday from 5 to 9 pm and be shown through Saturday. Each of the five artists has developed new works for the showing. With works that range from sculpture through painting and drawing to room installations, the gallery will thereby become the stage for a diverse exhibition program for a period of five weeks: Melora Kuhn and Lada Nakonechna have already been seen with exhibitions in the EIGEN+ART Lab; Mirjam Völker, Kristina Schuldt, and Kai Schiemenz were represented in group exhibitions in the Berlin and Leipzig galleries.

Kai Schiemenz (*1966 in Erfurt, lives and works in Berlin) focuses in his works on the city, space, and architecture and on the regulating function that these constructs carry out on people. His small-format sculptures are self-enclosed structures that combine digital techniques with natural materials like wood or paper. At the same time, they serve as models for spatially expansive installations and architectures for interiors and exteriors, in which Schiemenz uses lines of sight to construct spaces whose permeability enables them to involve the viewer directly. At the center is always the question of the influence of the built surroundings and the urban landscape on people. In his solo exhibition, Schiemenz shows two new groups of works in which the concept of architecture increasingly dissolves and the artificial materiality of the surfaces takes the foreground.

The works of Melora Kuhn (*1971 in Boston, lives and works in New York) are a constant observation of people's experiences with themselves and with society. Kuhn makes use of the pictorial language of mythologies and history, in particular the pictorial forms of 19th-century American art history, from which she isolates individual pictures and places them in a new context. Her interest thereby is in details that are forgotten or elided in the narrative, in order to take a firmly established and well-known story in another direction and to inscribe a new readability into the personal biographies of the protagonists in her pictures. To do this, she uses the background to hint at the persons' state of mind or a contour drawing above the portrait to add a second narration. She will show new paintings in her exhibition.

Mirjam Völker (*1977 in Wiesbaden, lives and works in Leipzig) is interested in forms of housing in her paintings. In the form of tree houses, poorly cobbled together huts, mobile homes, or vehicle cabs, they are placed like foreign objects in the midst of nature, where thickets overgrow and conquer them. These housings fail to fulfill their intended purpose, namely to provide shelter and safety from external influences, and they offer signs of discomfort and fragility instead of security and warmth. In her new large-format works on paper, provisional wooden huts stand on rickety stilts in a network of branches with no solid floor. They bear traces of former inhabitants and are now abandoned entirely to themselves and nature, which displaces them and brings them down like uninvited intruders.

Lada Nakonechna (*1981 in Dnipropetrovsk, Ukraine, lives and works in Kiev) confronts the viewer in her drawings, installations, videos, and performances with pictures of current events and pictorial experiences from the collective memory, which she manipulates or distorts. She often lets the human being, in the form of the viewer, become a manipulative, disruptive factor who himself influences and changes a given picture. For her exhibition, Nakonechna places a tower in the middle of the gallery room; like a lighthouse, it casts a cone of light onto the surrounding walls. When trying to decipher the texts written on the walls, the viewer constantly blocks the light he needs, or is blinded and caught, and must move with the light to be able to grasp everything. The lighthouse is actually a symbol for a firm hold, a glimmer of hope on the horizon, toward which one orients oneself when one has lost one's way. But where can it lead when four high walls lock the light up in an empty room?

In Kristina Schuldt’s pictures, faceless, two-dimensional, tubular women’s bodies lie, fall, languorously loll, and bend. They resemble smoothly polished machines more than living beings. The legs with their small feet in smart shoes flow smoothly into stretched and curving backs, with the fat, too-long arms bent over forward to the ground to support them.

Kristina Schuldt unashamedly makes use of the pictorial forms of Classic Modernism, but she creates her own new pictorial language, for example from the wavy hair of a Fernand Léger painting or the ornamented, broad-surfaced interiors of an Henri Matisse and powerful, schematized bodies that recall the avant-garde pictures of the 1920s. She exposes her figures to a garish party illumination and uses cigarettes and miniskirts to give them a nonchalance and coolness that is more reminiscent of teenagers than of the mature, strong women that the bodies present.

Even if the women in her pictures lie around as if “bored out” in bizarrely twisted or lethargic poses, they seem to be captured in constant motion; they have to hold on tight in a greatly extended moment of falling, because gravity no longer functions. This falling also describes the artist’s work method: at first she loads the canvas with forms and colors, piling them up on each other and filling the pictorial space until nothing more fits. Then comes the falling, which sometimes takes several weeks, a floundering feeling until the ideas materialize and the things she initially placed, like parts of plants or bodies, disturb the newly emerged order and are rejected or have to be viewed anew.

Among the twining bodies, one element arises again and again: a plant shooting upward until it collides with an obstacle or simply snaps over for lack of energy. This lack of energy seems to transfer itself to the bodies that, completely abandoned to the vanishing of their power, collapse on the floor or have to lean on supports to avoid falling from the smooth picture surface or plunging out of the picture frame, as in Schuldt’s most recent works.

The figures and their extremities in her earlier pictures were languorously subjugated by their situation; in the new works in the exhibition, an increasing consciousness of morals comes into play and is reflected in the bodies.

Beginning from a long delving into the Flemish genre paintings of Jan Steens, the portrait with its facets moves into the foreground. With an almost sculptural gesture, individual parts of the face are shaped, cubistically interlocked with each other, and corrosively subverted to the point of unrecognizability. Kristina Schuldt thereby remains loyal to her tubular forms, which for her are energy channels that, viewed long enough, twist as if in a distorting mirror and whose composition aims to appear like a sign or sound.

Kristina Schuldt (born in 1982 in Moscow, grown up in Neubrandenburg) studied at the Hochschule für Grafik und Buchkunst (Academy of Visual Arts) in Leipzig with Professor Sighard Gille and Annette Schröter and was a master student of Neo Rauch’s from 2010 to 2012. She lives and works in Leipzig.
www.eigen-art.com