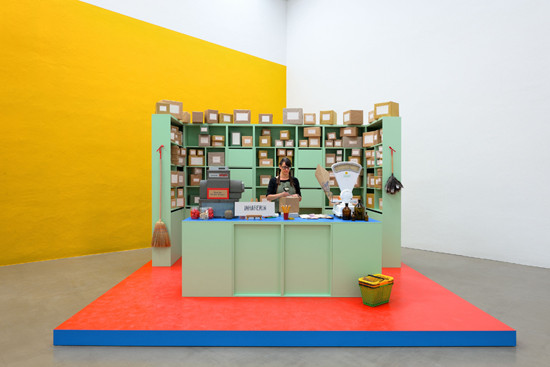 Christine Hill's studio, Volksboutique, examines concepts of value in consumer culture and re-invests discarded appurtenances with meaning and use. The subject of shopkeeping in various forms and the concept of the over-the-counter transaction recur in her projects, as well as a keen interest in collecting and inventorying daily life objects and phenomena.

Such interests are addressed in her ongoing project "Small Business" (since October 2010) in which the storefront of her Berlin-based workspace serves as a display case for Volksboutique interests and projects. The shop features a 4 meter long oak apothecary counter filled with an inventory of talismans for visitors to consider. Christine, the proprietor and service provider, provides a file box of "attributes" on flash cards, and together with the visitor assembles them a care package that consists of the objects they've selected with the character traits they've assigned them.

The conversation between Christine and the Small Business client hinges on the consideration, evaluation and admiration of quotidian objects. These invested selections are packaged together in a Volksboutique version of a Whitman's Sampler box (a well-known chocolate box with a selection of candies well labelled) that is then embellished and personalized for them. The result is a unique ephemeral package that represents the exchange between Christine and the visitor and provides a formidable keepsake.

The Small Business shop model can evolve and morph as Christine's interests expand.

For her exhibition at the EIGEN+ART Leipzig, entitled "Shop/Like, she draws a connection to this ongoing shopkeeping habit by installing a life-sized Kaufladen, which can be activated by gallery visitors. A scaled-up version of the familiar children's toy occupies the main gallery. Familiar shop accouterments and renditions of objects usually found in Kaufläden (packaging, bottles, jars) are all on display. The shelving contents reflect an interest in the phrenological divisions of the brain or thought process - the collected objects on display are assigned meaning and priority based on their placement and labeling. Taxonomically, they address more existential questions and considerations. Visitors to the gallery are invited to ascend the actual construction, and can pose for mobile phone pictures in the guise of the Proprietor.

A familiar aspect of the children's toy Kaufladen is the presence of an often over-dimensionalized scale (Waage). In English, the word "scale" refers both to the object on which things are weighed as well as "Skalierung" or "Umfang" - the level on which things are operating. The intentional invocation of intimacy, of a personal trade relationship with a business owner, of setting limits to practice and of personal investment are important in these projects.
www.eigen-art.com