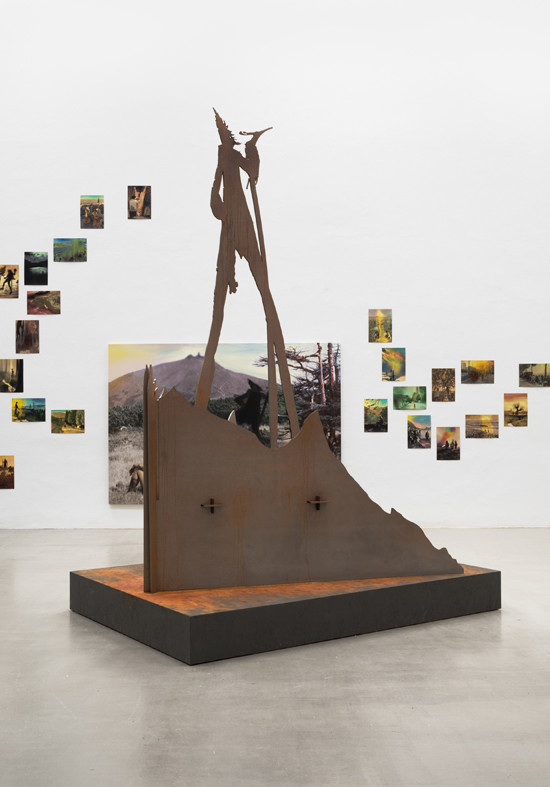 In his function as a documentary archaeologist, as Jörg Herold calls himself, the artist follows mechanisms of thinking, securing, storing, and researching. As a result of journeys to real and imaginary sites of memory, he creates actions, films, installations, and drawings that focus on cultural memory and the production of historical cross-references.

“In Fall 2013, I set off as a documentary archaeologist in search of the Silesians’ Kingdom of Heaven. In pictures, texts, and talks, I collected everything graspable and imaginary from a country that today exists without borders.

Silesia, at the same time Prussian, Polish, German, and Czech, is many hundreds of years old. Everyone called it his homeland.

Silesia as part of German history is the past. But as a beacon in the spirit of its former inhabitants, it is still alive. Fed by everyday remembrances and deeds of superhuman heroes and intellectual elites. Here the honest farmer plowed the heavy earth and the proud miner unearthed precious metals from its deepest depths. The animals burst with strength, the cows gave the richest milk, and the egg’s rich yolk radiated a full-bodied yellow. Nature, greener than anywhere else, its grass more fragrant, its water clearer, and its mountains are radiant backdrops for spectacular sunrises and sunsets.

Those are the tales of the past. Newer stories speak of flight and expulsion, destruction and decay. New people take half-hearted care of what was left behind. For centuries, patina grew on buildings and pictures – ideologically masked and subjected to high pressure cleansing. They lie cold and without time’s traces in the midst of newly built tracts, bleak landscapes, bleak legacy.

In these places, Rübezahl, the legendary master of mountains and caves, tells no new tales. He stands stiffly and mute, rolling around in steel.

A hero important to the Silesians is speechless. The former giant, bursting with strength, became invisible.

More than a hundred motifs, cut out of scrapbooks, reprocessed, and pinned on the gallery walls like post-its, provide an inkling of the vanished richness of sensual worlds; one senses the presence of an eternal, magical power. Small bolts of lightning and shadows wipe color across the picture. Vagueness develops into a trace, a form, figures that only wait for the viewer to charge them with new energy and history. In this way, this Silesia reinvents itself again and again – eternally existing as the memory of memory.” (Jörg Herold)

Jörg Herold (born in Leipzig in 1965) studied painting at the Academy of Visual Arts Leipzig and at the Kunsthochschule Weißensee in Berlin. His works have been shown in various solo exhibitions in museums and Kunstvereine, including in 1999 in the Museum der bildenden Künste Leipzig, in 2000 in the Von der Heydt-Museum Wuppertal and in the Staatlichen Museum Schwerin, and in 2005 in the Galerie der Stadt Wolfsburg and the Kunstverein Bielefeld. On the occasion of awarding the art prize “Junge Stadt sieht junge Kunst” (Young city sees young art), the Städtische Galerie der Stadt Wolfsburg devoted a solo exhibition to Jörg Herold in 2005; an extensive monograph on his works accompanied it. Jörg Herold has also participated in numerous exhibitions in Germany and broad, including at the Venice Biennale in Venedig (1995), documenta X in Kassel (1997), at exhibitions on 40 years of video art in the Museum der bildenden Künste Leipzig, the ZKM Karlsruhe, and the Ludwig Forum Aachen (2006, 2009), and in Südkorea and in South Korea’s Seong-nam Art Center and the Berlinische Galerie (2012). For his artistic work, he has traveled to Georgia, Japan, Southeast Asia, Iceland, and Ukraine, among other places.
www.eigen-art.com