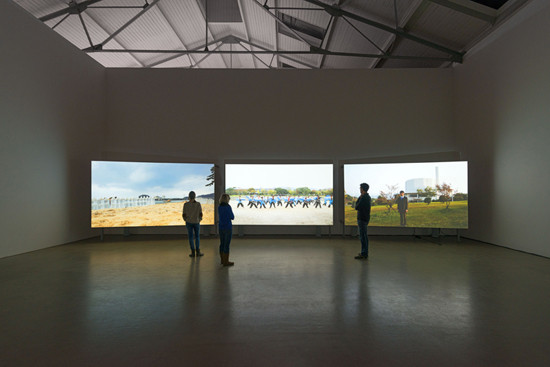 From January 11 to February 20 Galerie EIGEN + ART in Leipzig will show the solo exhibition of Nina Fischer and Maroan el Sani. The exhibition entitles Spirits Closing Their Eyes shows a movie with the same name, about life in Japan after March 11, 2011, when the devastating seaquake in the region Tohoku happened.

„ ... we are not focussing on the visible damages caused by the earthquake and tsunami, nor on the reconstruction and cheer-up activities following the disaster. Rather, we are interested in non-descript and invisible changes with a particular focus on the current physical and psychological state of emergency which oscillates between actual threat and subtle changes in everyday habits. We had numerous longer talks with people from different regions in Japan: refugees who, due to the nuclear disaster, have left their homes to live in temporary emergency shelters; families in Tokyo who have got used to handling Geiger counters on a daily basis; students who are organising a referendum against nuclear power; researchers who are developing cheap radiation gauges made from recycled plastic bottles affordable to everyone; artists who, in desperation over the general mindlessness, are organising a festival in contaminated Fukushima etc..
How do people remember March 11th 2011? What changed in their personal lives? What is the disasterʼs impact on each individual and on society as a whole? Is there an immediate danger? Or is there just a a diffuse feeling of uncertainty? What consequences are drawn? How do people in Japan see their future?The video installation „Spirits Closing Their Eyes“ is made up of three different image categories.
Next to the interviews, there are long photographic shots of places representing situations and moods in a country whose major changes remain invisible and only briefly take shape in the accounts of the protagonists. Furthermore, the project includes a series of short filmed portraits: for one minute, each interviewee looks in the camera thinking of their future which, for most of them, is uncertain.“