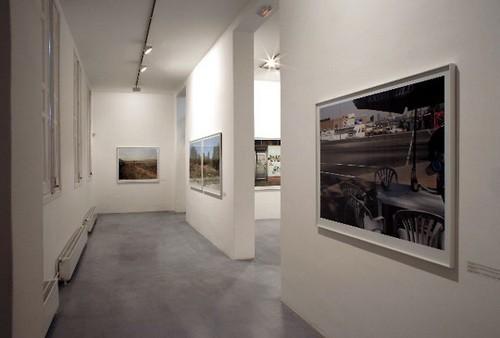 The artist will attend the opening on Wednesday 1st of April at 8.00 p.m.


In David Goldblatt’s second exhibition at the galería elba benítez the artist presents his “In the time of AIDS” suite, which features medium sized colour photographs. The carefully chosen selection of images on show at the exhibition allows viewers to understand the relevance of this project within the photographer’s oeuvre, which is highly regarded both in his own country and the rest of the world.

This suite could be described as landscape photography given that its stylistic subject-matter focuses on views of the city or countryside in which the human figure does appear in it, but in a way that accompanies and gives complementary information as to the main subject of the suite: the red ribbon, symbol of the struggle against AIDS, is the central element to be found in all the images. These photographs are, in fact, condemnatory of a psychological state which makes people blind to the multiplication of this ribbon throughout the South African landscape. We could say –as Walter Benjamín did about the photographs of deserted Parisian streets taken by Eugene Atget– that they are crime scenes, photographs taken to be scanned for evidence1. On this occasion one of the persons involved in this cascade of deaths can be named: Thabo Mbeki, the former President of the Republic of South Africa, who is partly responsible for having transformed the country into the champion of Africa (and therefore of the world too) in the amount of AIDS cases affecting its population, thanks to his policy of denial of the scientific facts regarding the ways the disease is spread2. The photographs possess the same qualities identified in David Goldblatt’s portraits: a direct confrontation with the subject, without recourse to odd angles or optical effects. The results are images that are forthright and frank3.

In the same fashion, the landscapes portrayed are anonymous and mundane, resembling the black & white portraits of the 60 and 70’s published by the artist through several books and series, where humanity is never spectacular, dramatic or grandiose since the hallmark of David Goldblatt’s perspective is his empathy with the subject, and as he puts it in his own words “I was completely engaged by what I saw and tried to penetrate and hold with the camera, of the wholly uneventful flow of commonplace, orderly life”4.

This frontal view and calculated lack of poetic devices echoes the work of Walker Evans, one of the artists who has most influenced Goldblatt, in particular Evans’ book Let Us Now Praise Famous Men5 which also demonstrated Goldblatt the potential union and partnership of word and image that would lead to his collaboration with Nobel Prize-winner Nadine Gordimer in the book On The Mines, 1973.

Ever since David Goldblatt became a professional photographer on the 15 of September 1963 his work has revolved around the concepts of belonging and identity, and a fondness for the everyday, even in tense and violent circumstances such as Apartheid. For almost half a century Goldblatt has managed to develop a personal style of making images without being propagandistic and at the same time without losing sight of his humanistic ideals, that are part of his family heritage (Goldblatt is English-speaking and Jewish, a combination of minority attributes in a country once obsessed by racial purity and the exclusion of “others”).

In David Goldblatt’s prolific oeuvre special consideration may be awarded to the following suites (also released as publications): In Boksburg (pub. 1982), The transported of KwaNdebele: A South African Odyssey (pub. 1989), South Africa: The Structure of Things Then (pub. 1998), Intersections (pub. 2005), Some Afrikaners revisited (pub. 2007), and Intersections Intersected (pub. 2008). His work may be viewed this year at the New Museum of New York and at the Malmö Konsthall (Sweden) as well as in the group exhibition Años 70. Fotografía y vida cotidiana, curated by Sérgio Mah, which will be presented in Madrid in the photography festival PhotoEspaña2009. In 2008, the Museu Serralves of Oporto (Portugal) exhibited Intersections Intersected (catalogue). A retrospective exhibition of his work was held in Spain at the MACBA, in Barcelona, in 2001 (David Goldblatt: Fifty One Years, catalogue). He took part in Documenta 11 (2001) and 12 (2007). His photographs are to be found in the collections of the Bibliothèque Nationale (Paris), the Museum of Modern Art (New York), the Victoria and Albert Museum (London) and the MACBA, as well as many other institutions and private collections.

2 David Goldblatt, in the time of AIDS, unpublished, January 2009