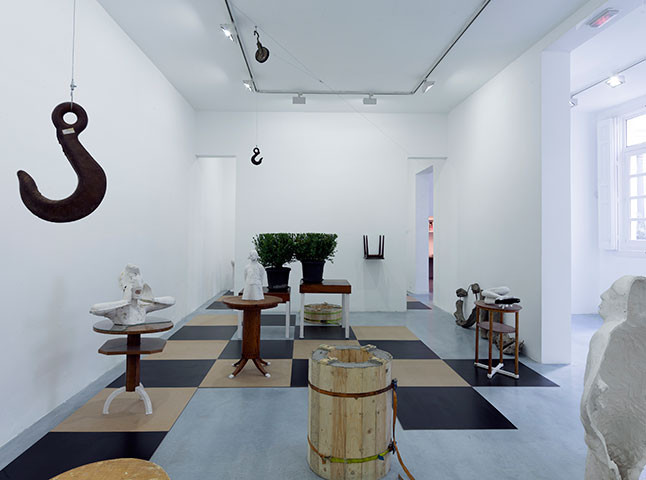 Marcel Duchamp famously (and not entirely truthfully) abandoned art for chess in the early 1920’s, dedicating himself to the game with such single-mindedness that his neglected bride, in a fit of despair, glued the chess pieces to the board one night while Marcel was asleep; the marriage, unsurprisingly, ended in divorce soon after. Like Duchamp’s wife, the Czech artist Dominik Lang (Praga, 1980) also forcibly yet more metaphorically takes on and disrupts the power of the chessboard in his gallery-wide installation entitled Difficulties of the Chess Composer, currently on view at the Galería Elba Benítez, being his first solo show in Spain.

In Difficulties of the Chess Composer, Lang (Prague, 1980) covers the gallery floor with a grid of dark and light wooden tiles, thus converting the gallery space into a symbolic chessboard. It is a simple gesture, and yet a gesture the artist then undermines by rudely removing certain tiles and stacking them unceremoniously around the gallery, as if the chessboard were in a process of construction or deconstruction. Moreover, Lang populates his ersatz chess-board not with chess pieces but with a series of sculptures, some the work of his late father (a figurative sculptor who spent most of his career in artistic isolation, barred from exhibiting by the authoritarian governmental regime) and others, not figurative but rather geometric, sculpted by the younger Lang himself. With these simple but effective ‘moves’, he implements and manipulates a potent metaphor. As Lang has said of Difficulties of the Chess Composer:

“I have positioned these objects and sculptures on the chessboard in a configuration which in the chess vocabulary indicates the end of the game, an impasse, a situation in which no progress is possible: the checkmate. One sculpture (the king) is being defeated by other players and cut into two parts while the other sculptures surround it like soldiers narrowing a circle around their enemy, a victim. For me this is a metaphor of something that is trapped in its current situation, for example a work of art that is caught in history and analyzed according to given principles. In another part of the gallery a group of cast flamingos are used as skittles and their fragile bodies are in danger of breaking. The danger or actual execution of some violence towards a body of a sculpture or object is present throughout the show. The plaster thus becomes the perfect material for demonstrating the fragility of things around us, the fragility and temporality of our bodies as well as ideas.”

Taken as a whole, the elaborate installation of Difficulties of the Chess Composer displays many the concerns and working methods that have become the hallmarks of Lang’s work, even during his relatively short career: his intense and fruitful examining and reexamining of his own heritage, artistic, familial and cultural; his keen yet poetic awareness of the shifting nature of history and historiography; and his assured capacity to engage in a kind of dramaturgy that involves the viewer as both participant and spectator. As Lang has said of his own work,“I see the space as an ideal theatre for restaging an old play that is being shifted in meaning but also in scale.”

In subtle interventions and installations, Dominik Lang examines the complex relations between viewer and object, artwork and art institutions, past and present, perception and understanding. Lang directs the viewer’s perception not only to the work on view, but also his or her own viewpoint, creating shifting and at times disorienting situations that induce both contemplation and questioning in the viewer’s experience of the art work.

Lang has had solo shows the Monash University Museum of Art MUMA (Melbourne, 2015), Project Arts Centre (Dublin, 2014), the National Gallery in Prague (2014), the Kunsthaus Dresden (2013), or Secession (Vienna, 2013). He emerged on the international scene with his large-scale installation entitled The Sleeping City at the Czech and Slovak Pavilion at the 54th Venice Biennial in 2011.

Exhibition made in collaboration with hunt kastner, Prague
www.elbabenitez.com