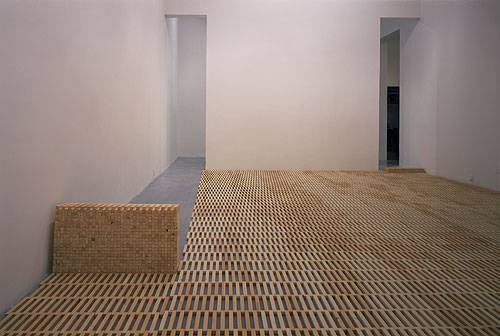 The Galería Elba Benítez opens the season with an exhibition showing a new piece by Portuguese artist Fernanda Fragateiro (Montijo, 1962). In this large-scale work, made of articulated wood running across the entire gallery floor, Fernanda Fragateiro explores anew the borders between art and architecture.
Using ideas as the driving force of her artworks, Fernanda works in close collaboration with architects and landscapists. Of all her many pieces, she has a special fondness for those which arose from her experience in “Ciudad Abierta”, in Ritoque, Chile, “a place founded in 1970 by a group of poets, architects, designers, artists, philosophers and engineers linked to the School of Architecture at the Catholic University of Universidad Valparaíso” whose work proved that “a utopia is possible”. The results of this experience can be seen in Caixa para Guardar o Vazio, 2005, the most socially committed work made to date by the artist, “a space that is simultaneously container and content (...) a sculpture resembling a closed box and activated by the bodies of two dancers who open the space, revealing the inside” (1), a structure which also transforms into an educational workshop for children.
Another recent project by the artist with certain similarities to the piece being exhibited now in Madrid is Existe um Substítuto para a Experiencia? 2002, one of her first floor pieces which –as has become customary in her output– employs reflective surfaces such as steel and mirrors thus inviting the spectator to interact with the space being observed. Simple materials, however, such as wood are also a staple ingredient of her artworks; in Contínuo, Construído e Variável, 2006, she builds an installation from modular structures which are repeated and enlarged in a space the artist describes as inhabitable.
At this new exhibition, the Galería Elba Benítez presents a single artwork made of wood, Expectativa de uma paisagem de acontecimentos, the dimensions of which adapt to the exhibition space housing it. Fragateiro pays special attention to the materials she employs and to the actual building process. In her artworks she often uses architectural elements, such as walls, ceilings and doors, to engage the spectator in art, which she considers a vital and active power for social change. In her most recent work, she shows a particular interest in floor pieces, the most uninterrupted space available to build on and bearer, moreover, of a myriad of connotations, such as being the last refuge for people when they have lost everything.
The artist defines Expectativa de uma paisagem de acontecimentos as a portable and reversible device in constant flux to adapt to the area it occupies, in a similar way seen in city architecture and landscapes. Expectativa de uma paisagem de acontecimentos occupies space in the gallery and, at the same time, is a space in its own right, one that treats the surrounding area as an integral part of the work.
Fernanda Fragateiro began exhibiting her work publicly in the mid 80s in Lisbon, where she currently lives and works. Her special relationship with architecture, city space and landscape has led to collaborations with architects and landscapists in projects such as Estaç ã o Biológica du Garducho, with architect Joao Maria Trinidade, 2006; Jardim nas Margens , a work in progress for the Parque Linear da Ribeira das Jardas, with the landscapists NPK, Cacém, 2003; the D. Pedro Ramos park project, with the architect Marie Nieves Febles, Tenerife, 2003; and Jardim das Ondas, with the landscapist Jo ã o Gomes da Silva, Lisbon, 1998. Other interventions in public spaces include: Pátios #1, #2, #3, #4 , Museu do Vinho, Bairrada, Anadia, 2003; Um círculo que nao es um círculo, sculpture for Rotunda das Portas de San Pedro, Angra do Heroísmo, Ilha Terceira, Azores, 2001; and O Paraíso é um Lugar Onde Nunca Nada Acontece, building a garden in Praça Raul Lino, Barrio dos Lóios, Lisbon, in collaboration with the local community. Her foremost solo exhibitions are Das Histórias Nascem Histórias , Centro Cultural de Belém, Lisbon, 2003; Quarto a Céu Aberto, Culturgest, Lisbon , 2003 ; and Existe um Substituto para a Experiência? 2/Tu És Eu? 2, Projecto Capicua 2002, Rivoli Teatro. Her work forms part of the collections of the Museo Nacional Centro de Arte Reina Sofía (Madrid), the Fundación Marcelino Botín (Santander), the Fundação de Serralves (Porto), the Fundación La Caixa (Barcelona), the Centro Galego de Arte Contemporáneo (Santiago de Compostela), Culturgest (Lisbon), MEIAC (Badajoz) and the Fundación ICO (Madrid), among others.
Luisa Espino