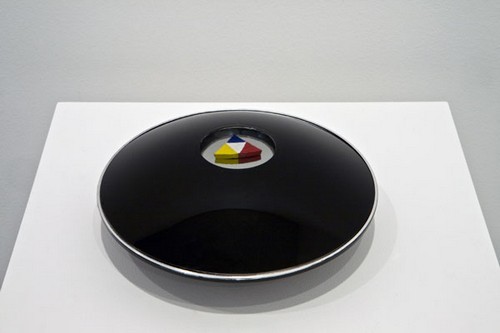 The Elba Benítez Gallery is proud to present the first show in Spain of Hreinn Fridfinnsson (1943, Iceland) who over the last forty years has quietly put together one of the most distinctive bodies of work in contemporary European art. Having taken as its starting point avant-garde movements of the 1960s, Fridfinnsson has forged a delicate and highly personal style that is conceptual in spirit and lyrical in tone, unassuming in material yet powerful in its effects, and above all attuned to the hidden poetry and mysterious epiphanies latent within our experience of the world.

Hreinn Fridfinnsson was born and raised in rural Iceland, and the island’s landscape – by turns rugged and gentle, scabrous and vaporous, vividly concrete and subtly dream-like -- informs much of his work, particularly in the prevalence of nature and the outdoors within its imagery, and in its incorporation of perceptual play (what is seen) into its conceptual framework (what is sensed).

After a brief period of art schooling in the late 1950’s, Fridfinnsson’s early artistic leanings were toward painting in a style of geometric abstraction. By the mid-1960’s, however, Fridfinnsson had begun to work along conceptual lines, with both Marcel Duchamp and the avant-garde art of the era (such as Arte Povera and Land Art) as key influences. He was a founding member of the SUN group in Reykjavik, an artists collective that formed an important part of the lively circuit of avant-garde artists that came together in Europe in the late 60’s and early 70’s.

Fridfinnsson’s first solo show took place in 1971 in Amsterdam (where he has resided since the early 70’s.) Entitled “Sacred and Enchanted Places”, that show consisted of a series of photographs and texts documenting sites in Iceland considered by local residents to be inhabited by supernatural, quasi-animistic forces – such as a rock that must never be moved, or a meadow in which the grass must never be cut. As Fridfinnsson later commented on the piece, “I believe there exists some cosy relationship in our minds between the rational and the irrational, the natural and the supernatural...this relationship helps the imagination and comforts the soul.”

Fridfinnsson continued exhibiting regularly but not frequently during the 70’s and 80’s, primarily in Amsterdam and Iceland, and in the process gained a small but devoted following among his peers (and later among successive generations of the younger artists.) An oft-cited work from 1974 -- “Secrets” -- consisted of placing an advertisement in a small magazine in Amsterdam, announcing that the artist was a collector of secrets and asking readers to share their own with him. “House Project”, from 1974, involved building an inside-out house, with interior decorations such as wallpaper, curtains and framed pictures on the exterior, and later exhibiting the photographic documentation of the curious construction. Later work became increasingly object-oriented, often employing everyday materials and found objects in delicate sculptures and installations, although without abandoning the use of text and photography or the frequent recourse to literary sources. In recent years, sparked by the vocal appreciation of younger artists such as Philippe Parreno and Olafur Eliasson, Fridfinnsson has enjoyed something of a revival, with major museum exhibitions in the Serpentine Gallery in 2007, the Kunsthalle in Malmo and the Kunstmuseum in Bergen, Norway in 2008.

Taken as a whole, Fridfinnsson’s work can be seen as moving easily among various media, such as photography, sculpture, texts, installation and, most recently, video. While there is no fixed, signature style within this range, certain unifying threads can be discerned.

For instance, Fridfinnsson’s works, regardless of format, are often structured, implicitly or explicitly, around dualities and reversals – between left and right, past and present, near and far, interior and exterior, empty and full, light and shadow, seen and unseen, dreams and waking reality. Hence his frequent employment of mirrors, which not only reflect (and thereby double), but also reverse that which has been doubled. Yet at the same time, Fridfinnsson’s handling of such doubling seems to highlight both the interstitial connections as well as the separations between that which has been doubled, giving rise to elusive yet powerful sensations of parallelism and simultaneity.

Other motifs in Fridfinnsson’s work include dreams, literature, music, the passage of time and the consequent sense of loss. Fridfinnsson’s text and photography pieces in general are imbued with poetic qualities that undermine but do not fully contradict their ostensible documentary function and factual content. On the other hand, when working with objects, Fridfinnsson often explores material qualities and textures of the objects themselves as well as the perceptual fields, such as shadows and reflections, generated by their placement. Thus Fridfinnsson’s frequent use of simple materials – such as paint stirrers, clear glass, or plain cardboard – that call less attention to themselves than to the effects they create. These sculptures, in which Fridfinnsson’s manipulation is limited to a non-intrusive minimum, tend away from allegory and metaphor, instead foregrounding the impact of their immediate, physical presence. As Fridfinnsson has remarked: “It is the presence of these pieces and what they may provoke in the spectator that I find fascinating... The content is the fact that the piece exists. The medium must be at one with the content.”