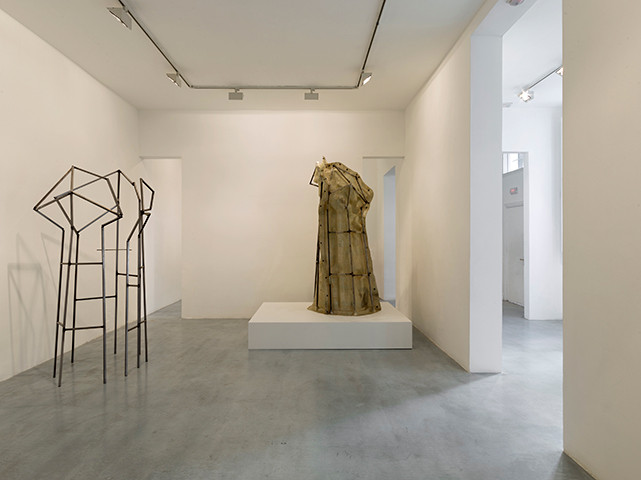 According to recent archaeological findings, certain prehistoric stones structures, even immense ones — indeed, nothing less than Stonehenge — do not occupy the sites where they were originally constructed, but in fact have been moved from place to place over the ages. When these so-called “second-hand monuments” (in archaeological parlance) were moved, or how — and of course no less important, why — is not known with precision. It is, in any event, a mind-boggling thought — but then again, the structures themselves boggle the mind, in their scale as well as in their mystery.

More modern-day variants (rather mind-boggling in their own, albeit smaller and far less mysterious, way) of relocated “second hand monuments” have served as a central motif in Ibon Aranberri’s work in various permutations across the course of his artistic career, and form an important component of the current exhibition Obstáculos para la renovación [Obstacles for Renovation] at the Galería Elba Benítez. But in keeping with Aranberri’s careful and meticulously developed methodology, the treatment of ‘content’ in the works themselves becomes the point of departure for a distinct subject of inquiry, more subtle and more indirect. For while formally grounding the work on view in an examination of stones and statues, in fact in Obstáculos para la renovación (as in a great deal of his work) Aranberri simultaneously addresses the underlying question of what might be referred to as ‘paraphrase’, i.e. the restating of that which has already been fully stated, and consequently the re-signification of what has already been signified that such an action inevitably entails.

While of great relevance to art (as well as to numerous other fields), the question of paraphrase, as the very word suggests, has been more fully investigated in reference to literature. In the realm of poetry, for instance, the very subject of paraphrase, while commonplace and perhaps even inevitable, has at times incited such vehement discussion and stricture that to paraphrase has been referred to as nothing short of “heresy”: such was the case, for instance, in the influential essay “The Heresy of Paraphrase”, where the literary critic Cleanth Brooks warns that when we paraphrase a poem, “we split the poem between its ‘form’ and its ‘content,’” thereby violating the work's essential "pattern of stresses."

As the framework of this formulation (itself, of course, paraphrased) implies, what underlies any such ‘paraphrastic’ action is an assumption that somewhere within the object of paraphrase there exists a structure — a code, a matrix, a “form” either material or immaterial — that will endure such a forcible process of re-statement or relocation; and more important, there follows the assumption that it is this structure that endows the whole with its essential meaning, and therefore can be safely disassembled and reassembled elsewhere. And yet, what of the echoes, the shadows, the resonances, the pattern of stresses and their resolutions, all of which not only resist, but in fact elude such a process? Where do they go, and furthermore, what -- as must invariably be the case -- takes their place? And how? And no less important, why?

Such questions permeate Aranberri’s Obstáculos para la renovación: hence the insistent examination of structures, particularly with regard to the relationship between exoskeletal or endoskeletal structures, between positive and negative, between figure and abstraction, even between indoors and outdoors. What is an essential ‘structure’? Where is the essential ‘site’? These questions also drive Aranberri’s use of photography, beyond (although fully in keeping with) their photographic or visual ‘content’: for what, after all, is a photograph, any photograph, if not a kind of forcible re-siting or relocation, a kind of re-statement, and hence a kind of re-signification, much like the numbered and re-assembled stones these photographs depict?

At the same time, in Obstáculos para la renovación, the concerns manifested in the individual works extend to the overarching conceptual structure of the exhibition as a whole. For again, an exhibition inevitably involves a forcible change-of-place, a programmatic disassembly and reassembly of component elements. But in Obstáculos para la renovación, Aranberri, in keeping with his particular methodology and sensibility to both material and form, orchestrates the exhibition so that, rather than seeking ‘second-hand’ replication, it signifies itself into its own ‘firsthand’ series of echoes, shadows, resonances, stresses and their resolutions.

Originally a sculptor, Ibon Aranberri works in a wide variety of formats, including sculpture, photography, film and collaborative works. Aranberri’s work frequently draws on human intervention in the natural environment, arriving at a subtle examination of the complex layering of history, culture, aesthetics and politics that surrounds us. Aranberri’s work is precise and analytical, thoughtfully examining codes of signification and representation; at the same time, it is characterized by a highly developed degree of aesthetic rigor and achievement, extending from individual objects to Aranberri’s carefully considered, conceptually-oriented exhibition presentations.

Aranberri has had solo exhibitions at the Vienna Secession, the Fundació Tàpies, the Museo Nacional Centro de Arte Reina Sofía, the Kunsthalle Basel, the Frankfurter Kunstverein and elsewhere, and has been included in numerous group exhibitions around the world. He was invited to participate in Documenta 12 in 2007.
www.elbabenitez.com