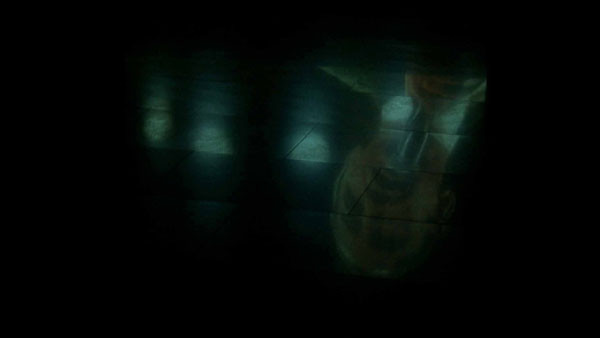 True to an obsession about cataloguing and an exploration of the medium of painting, Ignasi Aballí (Barcelona, 1958) displays a selection of his most recent works that corroborates the cohesiveness of his artistic development and demonstrates the logical evolution of his oeuvre since he first became associated with the galería elba benítez in 1990.

The videos “Reflexión (Passion)” and “Reflexión (2008)” may be regarded in connection with two areas of the artist’s work: on the one hand, his exploration of light and reflection as pictorial mediums, and on the other, his concern and attraction for film as an artistic language, especially focussing on proposals made by nouvelle vague filmmakers and by the work of writer Georges Pérec. In terms of form, both of Ignasi Aballí’s films are reflections of projections in which ghostly, indistinct and barely legible pictures attain a sense of unreality resembling a dream-like vision, and in which filmic narrative is purposefully hindered with the intention of provoking a re-reading built upon these altered codes. In his recording of Jean-Luc Godard’s film Passion, 1982, for example, this feeling is heightened because the subtitles are inverted. Passion, deals with the problems faced by the artist, with the frequent failures inherent to the creative process and with the relationship between filmed image and painting, all of which are aspects also to be found in Ignasi Aballí’s previous works. The second projected piece on exhibition is the film version of his “Calendarios” series that displays photographs of the 366 covers of the El País newspaper spanning the entire year of 2008. In this game of reflections nothing is as it seems, the frontiers between the original and the copy, and between reality and fiction, fade away and legible and illegible texts share the space of the artwork. An artwork that superimposes and confronts the architectural features of two different spaces: the space of the recording and the space of the exhibition. The floor of the gallery, moreover, subtly echoes the reading connotations of the original piece.

The mirror, the doppelgänger it reflects, deforms or reveals, is also the mainstay of the new pieces in the “Listados” suite on display in this exhibition. In them, one solitary word faces another. These cataloguing pieces do not work, like the lists we are accustomed to, by numbers and multiplication, instead the uniqueness of the word exposes the loneliness of the onlooker watching them. As the artist has said: “The words are fragments I extract from a newspaper, from an object linked to reality. They are the beginning of a list that needs to be completed”. This is because the essential factor and the generator of meaning in Aballí’s work is still the spectator, without whom the artwork could neither exist nor be re-created in the eyes of the beholder.

Lastly, the suite of photographic works entitled “Sinopsis II (película sin fin)” recalls its predecessor, “Sinopsis”, 2005. The city spaces portrayed in these photographs reproduce the objective view of a security camera located in a public space, and the accompanying texts refer to a crime, a fait-divers, and how the presence of a camera filming, a familiar feature of our current surroundings, while the crime was being instigated led to the detection and later arrest of the suspects. Nevertheless, these works continue to question the borderline separating reality and fiction, just one of the many dichotomies underpinning the oeuvre of this artist.

Since embarking upon his career at the beginning of the 90’s, Ignasi Aballí has regularly exhibited his work at art institutions. Most notably so in his one-man show at the MACBA in Barcelona (0-24 h, 2005) which toured afterwards to the Museu Serralves in Oporto, the Ikon Gallery in Birmingham and the ZKM in Karlsruhe; in his contribution to the last Venice Biennale (2007) and his participation in “Fit to Print”, Gagosian Gallery, New York (2007). His installation entitled “Zona euro”, 2008, may be currently viewed at the exhibition given by the Banco de España to celebrate the 10th anniversary of the introduction of the Euro. His work features prominently in most Spanish art centres, as well as in major collections in Spain, Europe and America.

By way of extending this exhibition, we will present additional works by Ignasi Aballí at our stand in ARCO, thus creating an expanded exhibition in two places for the duration of the fair.