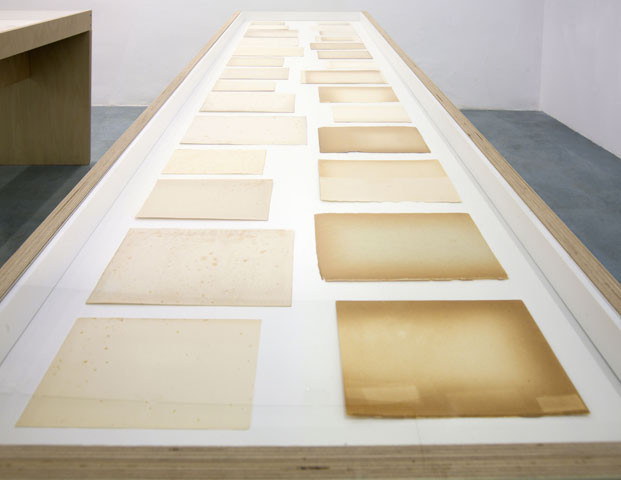 “Absence of evidence is not evidence of absence” – so runs the aphorism. To put it another way, the fact that one cannot see (or otherwise detect) something is in no way proof that that same something does not in fact exist. It is a clever line of reasoning, but one that is all-too-easy to abuse into fallacy: for how, as Bertrand Russell pointed out, can one possibly prove that there is not indeed a teapot orbiting Mars at this very moment? Can you prove – or rather (and this is key), can you disprove that? No, probably not.

But beyond the realm of formal logic, the reason this particular aphorism endures is because it contains an element of recognizable, understandable truth: there is, indeed, something, perhaps even much, that lies beyond evidence, or rather, on “the other side” of evidence, an equivalent to the dark side of the moon in that we know it is there but likewise know we cannot see it – the other side of sight, of time, of power, of fact, of language, even of thought.

An examination of the relationship between absence and evidence runs throughout Ignasi Aballí’s current exhibition entitled Mirar (el otro lado) (“Look (to the Other Side”) at the Elba Benítez Gallery. Absence has been a long-standing concern of Aballí’s conceptually oriented practice, at once a tool and a subject matter, and in his work it has manifested itself (if that is possible to say about absence) in various corollary variants, such as disappearance, transparency and invisibility.

But in Mirar (el otro lado), however, Aballí shows that both absence as well as evidence are capable of taking various guises, even to the point of reversing their relationship to one another. What is absent may have disappeared, may not yet have appeared, or may be inaccessible. Texts that cannot quite be read, as in Doble lectura, are in essence ‘absent’, although their marks remain; on the other hand, the physical components of air, which are described detail in Menos transparente, are inarguably present, despite their invisibility. Between a free-standing, decontextualized prologue and epilogue (Prólogo/Epílogo)lies like a field of infinite possibility, as yet unrealized; while the generic indexes of Páginas– a display of a series of weathered, yellowed sheets of refugee-like, book-less printed pages -- function as an archive of absence, a library of loss, and yet (and this is key to Aballí’s graceful conceptual positioning) also as a promise of what may yet lie in store, of indexes and books to come. So that while in Palabras sobre papelAballí may seem to lament, in rather shockingly harsh language, the loss of paper as the centuries-long, single-most shared support for our sources of information, he is likewise sufficiently open-minded – i.e. able to know that something other than absence lies beyond the absence of evidence – in the literally and conceptually generous multiple Cualquier color.

Ignasi Aballí (Barcelona 1958) traces the elusive marks left by the passage of time in works that use an eclectic range of unconventional materials such as dust, corrosion, newspaper clippings, shredded banknotes or typewriter correction fluid: the delicate visual poetry that emerges is instilled with a haunting yet unsentimental sense of absence and ephemerality. Aballí’s diverse work includes language-based pieces, conceptually-oriented sculptures, paintings and photographs.

Aballí has had solo exhibitions at MNCARS (Madrid), the MACBA (Barcelona), the Pinacoteca do Estado de São Paulo, the Serralves Museum (Porto), Artium (Vitoria), the Meesen de Clerq (Brussels) and the Fundació Joan Miró (Barcelona) and has participated numerous group exhibitions. He was included in the Sydney Biennial (1988) and was selected by Robert Storr to participate in the 52 Venice Biennial in 2007 with a project of 30 works from the series Listados. This is Aballí’s sixth exhibition at the Elba Benítez Gallery.