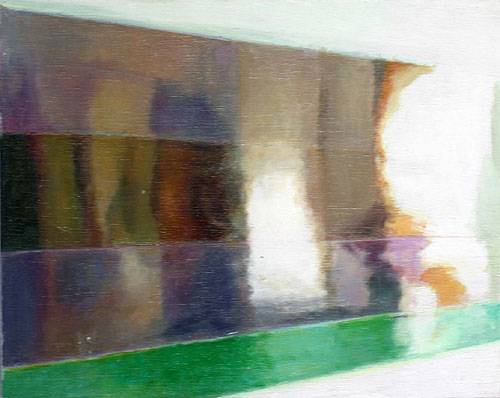 The Galería Elba Benítez presents the first solo exhibition of Juan Araujo (Caracas, 1971) to be held in Spain. The show features the artist’s most recent work. The paintings of Juan Araujo invite the onlooker to consider the consequences of the reproducibility of a work of art: what remains of its essence, texture, medium and argument once it has been reproduced? Juan Araujo pays tribute to the history of art while presenting new portrayals linked to the perception of an original work or art. For the exhibition at the Galería Elba Benítez he presents his portrayals, based on paintings from the "Coloritmos" suite by Venezuelan artist Alejandro Otero and on the Villa Planchart by the architect Gio Ponti, as well as some disturbing "cuadros-libros" he has made.

The media’s effect on the history of art has led to new relationships between the public and the work of art. Juan Araujo analyses the identity of the work of art in this new setting. Using a traditional painting medium –oil on wood- Juan Araujo paints a variety of reproductions associated with the history of painting: photos, publications, catalogues, magazines, post-cards and posters. These reproductions are depicted using materials and media different to those intrinsically associated with reproductions, in this way creating a sense of unfamiliarity in the observer. Extending this game of alterations even further, Juan Araujo sets the size of his "paintings of reproductions", to the size of the "original" reproduction. This reversal of reference points leads to a deliberation on the current role of the original work of art.
The city of Caracas is also a subject under study in Juan Araujo’s work. On this occasion the artist has made an indirect portrait, from already existing and published pictures of the city. Such is the case of his "Libro de Parques de Caracas" suite of paintings, in which he reproduces a catalogue of state propaganda from the time of the regime of dictator Pérez Jiménez that compiled and published the city-planning projects undertaken by the government. In his "Gaceta Hípica" series, Araujo reproduces the covers of magazine of the same name, reflecting a typical sporting activity enjoyed by the city’s inhabitants and also paying tribute to the work of Muybridge and Degas.
In the Juan Araujo exhibition at the Galería Elba Benítez, one can discriminate between three groups of works. Firstly, there is his "Reflejos en Coloritmos" suite, based on the work of Venezuelan artist Alejandro Otero (El Manteco 1921- Caracas 1990), precursor of the modern movement in Venezuela and one of its foremost exponents of kinetic art. For his paintings, Juan Araujo appropriates details from Otero’s "Coloritmos" suite, while on exhibition at public and private collections in Caracas. Araujo makes new composition based on reflections that the patina of Otero’s works cast on the spectators. On occasions, these reflections are due to the works having been over-restored, which implies that Araujo may be questioning the loss of identity suffered by a work of art exposed to this kind of restoration, in the same way that the identity of a work may be undermined by being incorrectly reproduced. On other occasions they are natural reflections. In both cases, the reflections are once again “images of images”, indirect images of the object being portrayed: the famous "Coloritmos", representative of a specific artistic and cultural moment in Venezuela in the 50s. The second group of works are those from his "Cuadros del Cerrito" or Villa Planchart suite. Villa Planchart was built in Caracas, from 1953 to 1958, by the Italian architect Gio Ponti and dates from the period of the country’s economic and social prosperity. It is one of the city’s most exceptional residential buildings and bears witness to the interest in collecting and design that characterized the social class who had benefited from the economic growth of the country in those years. The impression made by details of the art collection, the furniture, the collection of orchids and hunting trophies, evokes a glorious past, while at the same time paying obeisance to the stylistic sublimation carried out by Gio Ponti on the Villa Planchart, in an achievement bordering on “total art”. Two works comprise the third group that completes the exhibition underlining the importance Juan Araujo gives to the reproduction of the history of art in publications. The artist made two "cuadros-libros" (“painting-books”) to complement the other two suites "Reflejos en Coloritmos" and "Cuadros del Cerrito" (Villa Planchart). The front page of Gio Ponti’s book and the inside pages of Alejandro Otero’s catalogue are disconcerting for the spectators. The very different inherent qualities of a work of art and a publication are combined together in these pieces in a single medium, provoking a sense of confusion in the viewer. Are they unique, delicate and “sacred” paintings, not to be touched by the public, or are they practical books to be copied, consulted and handled?
Juan Araujo was selected in 2006 to take part in the XXVII Biennial of Sao Paulo. In 2005, he participated in "In Site", San Diego Museum of Art, and, among other group exhibitions, in "Jump Cuts" at the American National Society, New York, in "Arte Contemporáneo Venezolano de la Colección Cisneros (1990-2004)" at the Museo de Arte Moderno Jesús Soto, Ciudad Bolívar and in "Torres de Caracas Modernidad silenciada" at the Sala Mendoza, Caracas. In 2004 his work was presented at the Casa Encendida, Madrid, in the exhibition "Afinidades Secretas".
Pia Ogea