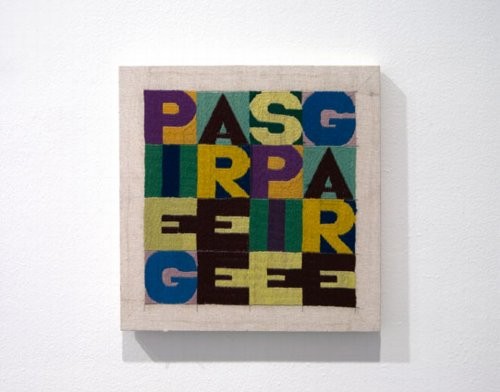 History, despite its insistent claim to the contrary, belongs to the present tense. History is always in the making. History is a process, not a result. History and the writing of history are one and the same thing.

An examination of the ever-unfinished construction of history is central to the work of artist Mario García Torres (México, 1975, lives and works in Los Angeles), and in guest-curating “Objetos para un rato de inercia” [“Objects for a Moment of Inertia”] for the Elba Benítez Gallery, García Torres brings a similar historically-informed, researched-based practice to exhibition-making. As García Torres has said about his approach: “I am not intending to write history. I am trying to call attention to some interesting marginal stories that I think could be relevant today...I hope my approach to the matter could be seen as a critique of the way history, and art history specifically, is constructed.

In “Objetos para un rato de inercia” ,García Torres has gathered together five different artists whose work made crucial contributions to the rich and tumultuous period of Conceptual Art in the late 1960’s and early 1970’s. Despite the explosive radicality and heterogeneity of the movement’s origins, the discourse surrounding Conceptual Art quickly took on sharply dogmatic tendencies; nonetheless, beyond the doctrinaire quarrels and quibbles (many as yet unresolved) of London and New York, individual artists continued producing important genre-stretching and genre-blurring work, as is evidenced by the selection of work in “Objetos para un rato de inercia”.

At the same time, the selection reflects García Torres ́s extensively researched artistic commitment to the individual artists included in the show. Thus “Objetos para un rato de inercia” is not so much a revision as an up-to-date re-appreciation of the art historical canon effected by a practicing contemporary artist, and Garcia Torres’s curatorial approach is not so much an attempt to rewrite but rather to enhance and enrich our historical understanding.

Like the individual pieces in the exhibit, the full assembly of work on display in “Objetos para un rato de inercia” is open-ended, an exploration rather than a conclusion, an essay rather than an argument. Certain elements and motifs are shared by many of the individual works – such as the residue of gesture in objects, or the pursuit of traditional formal concerns via non-traditional materials, or the incorporation of time as functional element, or a fierce resistance to commoditization and commercialization. But again, in keeping with the irrepressible exploratory spirit embodied by the works themselves, these connections are suggested rather than imposed in the show as a whole.

For instance, David Askevold’s Fill (1970) incorporates sound art, sculpture and performance into a piece which in fact in none of the above, but rather a key work of early video art. Alighiero e Boetti’s colorful fabric-work Piegare espiegare (1980) employs the unyielding rigidity of the grid as a means of creating a more supple union of text and texture, while also displaying the artist’s idiosyncratic fixation on dualities and codes. Luis Camnitzer’s metrical and hypnotic Cuarta lección sobre la Historia de Arte (2000 - 2010) focuses the viewer’s attention on the immediate here-and-now of the work and the space in which it exists, while simultaneously hinting at the unarticulated question as to what might be missing. Barry Le Va’s Untitled (1966) defies Minimalism’s imposition of order by utilizing techniques of dispersal as a means of creating a spatially complex floor sculpture: at the same time, the finished object continues to testify to the gestural, almost ephemeral act from which it has been fashioned. And Francesc Torres Escultura con estria lateral (1968) utilizes a basic and emblematic form as a variation, not a repetition, a fragile withdrawal from Minimalism’s more industrial seriality; moreover, by arriving at a variable volume via accumulation, the works seems to promise the potential for further variation.

The works in “Objetos para un rato de inercia” share many artistic concerns, rooted above all in the era in which they were created. Yet in bringing them together in a single exhibition, García Torres is not so much illustrating a fixed thesis as recreating the echoes and resonances that are also the stuff of which history is lived, if not always written.

“Objetos para un rato de inercia” coincides with an exhibition of new work by Mario García Torres – “¿Alguna vez has visto la nieve caer?” [“Have You Ever Seen the Snow?”] at the Reina Sofía National Museum and Art Center, and the title of the show is a continuation of Garcia Torres’s solo show “Objetos para un momento de ocio” [“Objects for a Moment of Leisure”], held at the Elba Benitez Gallery in 2007

George Stolz
The Elba Benítez Gallery would like to thank the following individuals
and institutions for their support in making this exhibition possible: