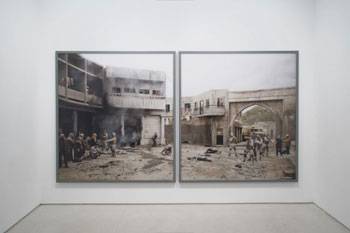 Elizabeth Dee is pleased to present the four person exhibition of works by: Adrian Piper, Eric Baudelaire, Josephine Meckseper and Wayne Gonzales which will open on Saturday, November 4th at the gallery and run through December 23rd, 2006. An opening reception for the artists will be held Saturday, November 4th from 6:00-8:00 PM.

This exhibition centers around two generations of artists, both American and European, who will present their work in autonomous ways inside the space. After the events of 2001 and the beginning of the Iraq War in particular, we have increasingly seen a prevalence of socio-political imagery used as material in the appropriation of form, manipulation, social documentation and translation.

To subjugate, personalize, infuse meaning, or question social protocols both points to forthcoming practices and also directly references artists from previous generations who have always played a role in subversive action and philosophical reflection.

The gallery is honored to present four works from Adrian Piper’s most recent series which are being exhibited for the first time. Since the late 1960’s, Adrian Piper’s history has always utilized representation, political dissonances and discourses relating to ethnicity and gender in appropriated images and writings from a wide variety of recent and historical sources. The ongoing series entitled Everything, begun in 2003, employs a single text,

Everything will be taken away

as a constant that is permuted in a variety of media and contexts. The four works exhibited are from Everything #2, which uses photography, photocopying, offset printing and erasure on personal photographs taken by the artist. The permanent repetition of the phrase is crucial to the series. In every work/context the sentence develops a different aspect of its possible meanings and thus enlarges the scope of the viewers’ individual reflection upon it. These works are poetic and philosophical in their relationship to Piper’s writings and philosophical work.

Eric Baudelaire’s The Dreadful Details interrogates the form of the war image in this age of saturation. Created as a commission for the Centre National des Arts Plastiques, France and adopting the mode of a fresco, in a 7 x 12 foot photographic diptych, the composition expresses the crisis of what Gilles Deleuze called “the image-action,” emphasizing the extent to which the war image can no longer convey the slightest “grand form” but only multiply poisonous clichés – ready made images devoid of affect because they are already known and pre-digested, present both within us (as blurry and overwhelming memories) and in front of us (as worn out images in magazines and advertising) thus rendering obsolete any distinction between interior and exterior, the spirit and the world around us, between us and them, actors and spectators.

This title, The Dreadful Details, which refers to the caption of one of the earliest photographs of a battle field, shot during the American civil war by Alexander Gardner and Timothy O'Sullivan, proposes a form of ethical response to the issue of war image’s over abundance: it is precisely where there are too many blinding images/clichés that we must introduce a picture capable of showing us how to see once again. And so the piece accepts Deleuze’s challenge and proposes a form that “lets an image emerge from all the clichés” by fully integrating the inescapably iconic nature of war images in a dialogue, or mirror game, inside of the piece through its construction.


Josephine Meckseper’s important series of photographs of Iraq War demonstrations held in Berlin (2002) entitled Berlin Demonstration 1, will be shown in their entirety for the first time in New York (and concurrently in the Seville Biennial, at Foundation BIACS, Seville through January 8). This body of work shot on location is foreboding of the fragility of Europe’s status within the current political situation, while reminiscent of earlier moments of crisis and social instability of European statehood (specifically Germany’s). These works offer a new view into the artist’s ideas that have inspired recent films and subsequent photographic works. This work is reminiscent of the fall of the Berlin wall, of earlier wars, the protest culture of the 1960’s, riot gear, tear gas and destruction from the chaos and anarchy of public gatherings. Here they are re-presented in this non-narrative and iconic photographic series.

Wayne Gonzales uses photographic sources and downloaded images from the internet as reference points to historical and contemporary events in his paintings. His works have referred to individual figures from American history as well as to symbols of American power, both institutional and private: the White House, the Pentagon, and real estate development in the form of upscale restaurants and resorts.

A variety of techniques rooted in the commercial arts and Pop Art usually mask the artist’s intent and manipulation of his appropriated sources, but are used here to produce some of the most aggressively political art he has made as well: political posters, images of politicians draped in the flag, and advertisements, some of which have not been shown before. Gonzales will contribute a mixture of paintings and works on paper, an indexical selection of works from the last five years and a virtual time capsule of dissent in the Bush era.