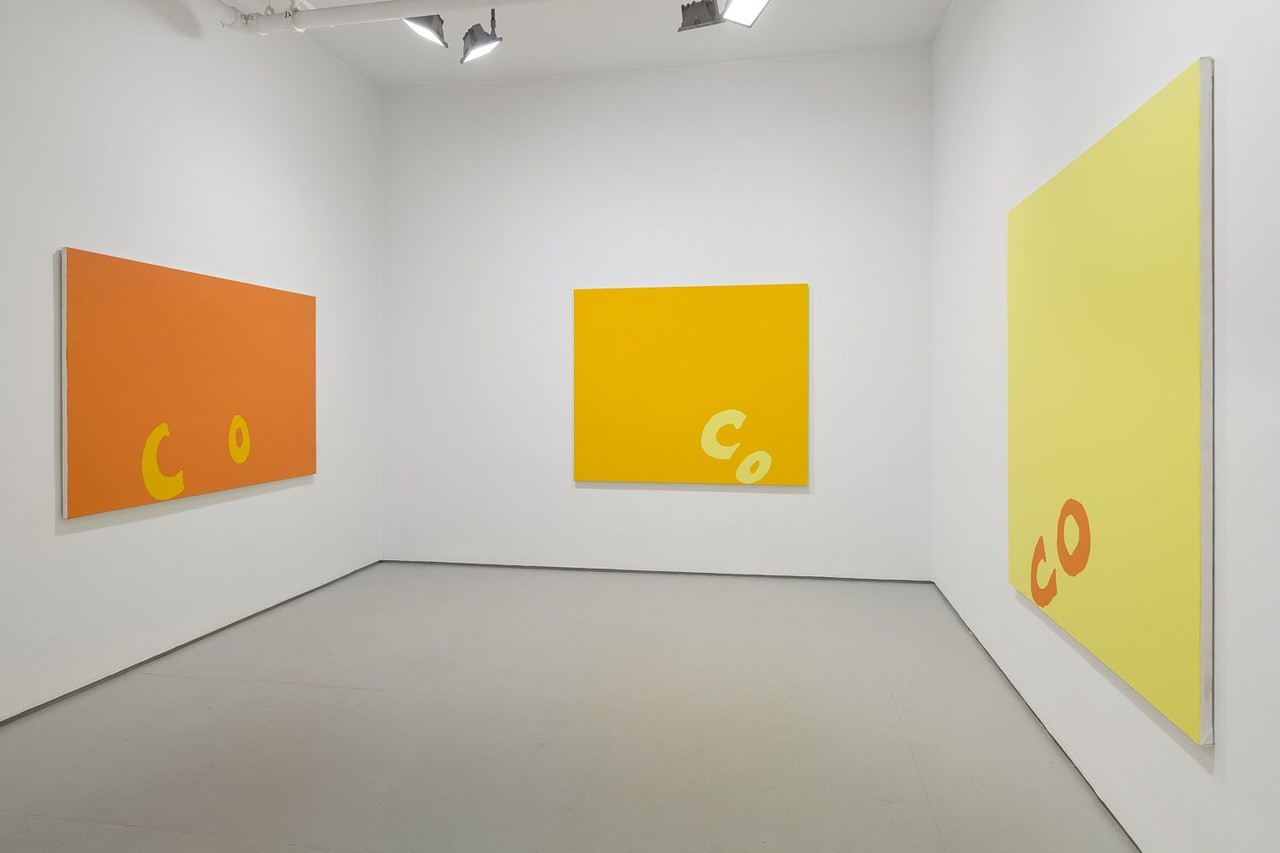 Elizabeth Dee is pleased to announce a new exhibition of recent paintings by Carl Ostendarp, his fourth solo show with the gallery. Since the late 1980’s Ostendarp paintings have generously incorporated idiosyncratic strategies such as signs, symbols and text that function in between language and typography, allowing us to experience and expansively re-reference, rather than merely footnote painting’s modernist history or, as Ostendarp has noted, “the space between ‘historical and pictorial’ languages”.

In his exhibition entitled BLANKS, Ostendarp’s work takes a more radical position, engaging the sonic vulnerability and versatility of the monochrome with the repeated device of painting his initials and disrupting the monochromatic surface of each work. Extending the artist’s core reference point of 1965-1975, when artists begin to more precisely take control of the exhibition context and resulting in the immediacy of new forms such as performance, installation and new media. This shift broke into movements of minimalism, color field painting and op art, which began to reference each other. Much of this disruptive innovation was actively in dialog with musicians and composers, who were frequent collaborators. In Ostendarp’s exhibition, he stages a reflective response to his ongoing research of this period, by employing the monochromatic painting in precise consideration with the gallery space, then effectively “ruining” the monochrome field by placing his initials in corresponding works in the gallery.

Recent completion of a series of wall paintings and mural installations at various venues: Pace London, MMK Frankfurt and the Museum Ludwig in Cologne, has led to a further articulation of Ostendarp’s fields in extreme proportions, as well a reading of the subject/object connection within his own work. Ostendarp produced an artist book to accompany the exhibition, which consists of working notes of these sources that demonstrate his fascinating process. Placement of the initials varies, as does the scale, such that the paintings relate mathematically to the proportions of the gallery rooms. Sizes are designed specifically to confound the idea of a center within each painting--the initials at bottom creating a landscape horizon when the letters are animated in various stages of horizontality. Paintings are of human scale, anticipating the viewing experience and inviting engagement in the forward and back, side to side "dance," as one would with a Barnett Newman work.

The titles are taken from the names of notable Hammond Organ players, popular in the 60’s and 70’s, whose music was later frequently sampled. The organ features a special type of speaker that results in a booming, resonant vibrational sound which obliterates melody and becomes prolonged, literal and abstract.

The exhibition stages an experience both visual and physical in relationship to the architecture of the gallery that could not be experienced online, or at art fairs. This exhibition is a refreshing antidote to the scanning inclination that has been fully present in the larger visual culture. These works ask to be discussed, felt, read and experienced in real time.

The humanity and authenticity of Ostendarp’s work has influenced many artists over the years and enthusiastically engaged a self-selecting audience committed to the dialog of painting in New York. His work emerged in the late 1980’s in a solo exhibition at White Columns. He exhibited actively in the 90’s with John Post Lee and Jay Gorney into the mid 90’s with one and two solo exhibition respectively, along with exhibitions at Daniel Weinberg in Los Angeles and Galerie Rolf Ricke in Cologne. The artist is one of the original founding artists of Elizabeth Dee, having joined the program in 2001 as the inaugural show at 545 West 20th Street. He has exhibited in solo contexts at institutions internationally, mounting monographic projects at MMK, Museum fur Modern Kunst, Frankfurt and Museum Ludwig, Cologne. A survey of his drawings was held at the Aldrich Museum in 2003. This is his fourth solo show hosted by the gallery.
www.elizabethdee.com