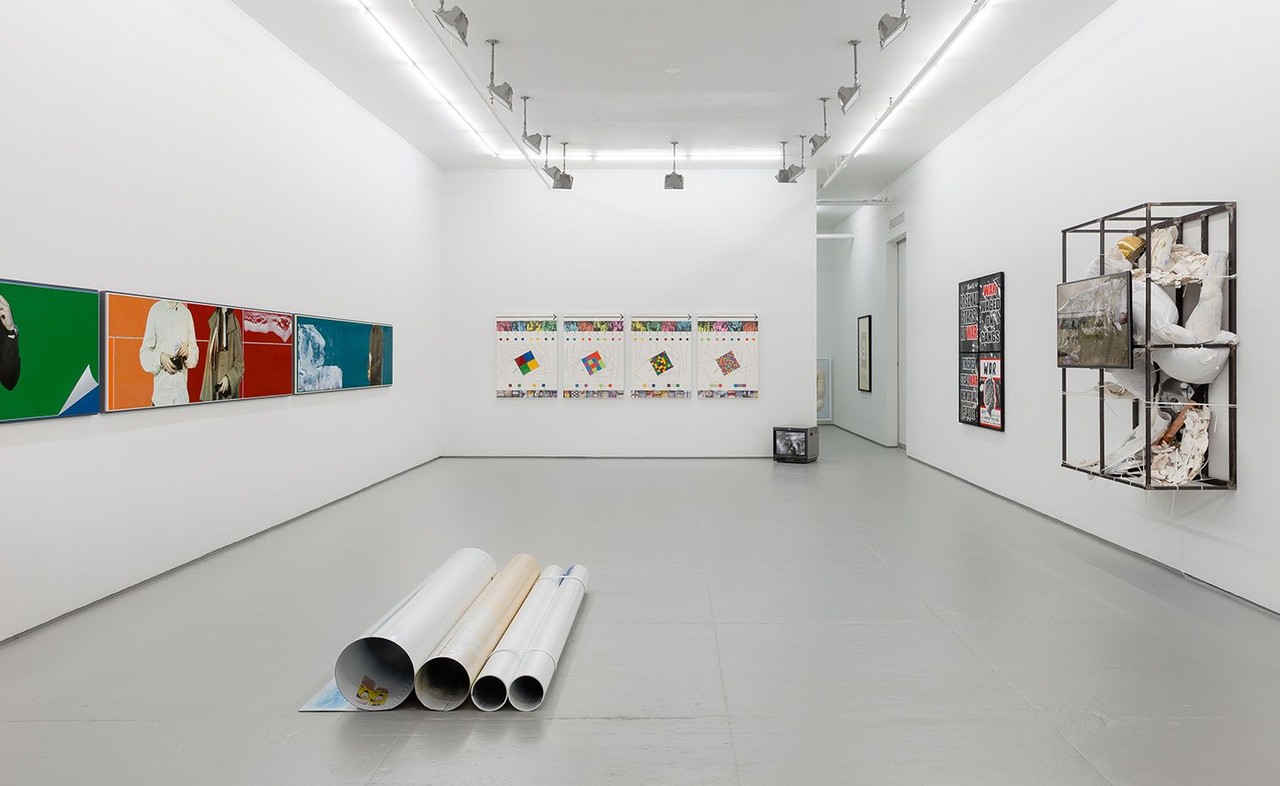 Elizabeth Dee is honored to present English Summer, a group exhibition featuring Nicolas Deshayes, Gilbert & George, Jack Lavender, George Henry Longly, Matthew Smith and Stephen Willats. English Summer presents an exciting new generation of British artists to New York, artists who are united through the impetus to resist, brand, occupy, embed and imply through the material process. Taking inspirational cues from visionary outliers, such as Gilbert & George and Stephen Willats, who act as cultural touchstones and guides throughout the exhibition, Deshayes, Longly, Smith and Lavender produce works that defy conventional definition by being neither painting nor sculpture. These talented artists join a heritage rich with conceptual and symbolic associations about place, the body, sex, architecture and networks. Autonomous in position, and polymorphous in outlook, these artists serve to both celebrate a spirit that embraces the present and only looks forward.

Stephen Willats has worked with the interactions between people and places for five decades, filtering archival data visually through invented diagrammatic languages. Using networked systems to explore “existing values and provide a vision for the future”, Willats has distinguished his work from his peers. The conceptual art movement of the late 1960s sought to classify and rationalize one’s subjective experiences in the public realm. Willats has engaged content that is inherently irrational and social in nature, embracing and exploring the participation of a larger public, often in unexpected and spirited ways, using humor and new media, to focus the connection between the viewer and the larger social ecosystem.

Gilbert & George like Willats, have been a major inspiration for artists working with identity, and the stylistic and conceptual themes around information. Their work spans a variety of media, yet they consider it all to be sculpture, with them as a central presence. Everything is potential subject matter for their depictions of modern urban space, and they have always sought to address fundamental issues of existence, social issues, taboos and artistic conventions.

Nicolas Deshayes explores and challenges the social vernacular of the 21st-century industrial world, through mass-manufactured materials that maintain an organic quality belying the synthetic sources they are formed from. The artist eschews traditional classification, as witnessed through four archetypes presented in this exhibition. The main gallery houses his series Molars, which refers to the rear teeth in the mouth. Made from fired vitreous enamel, the same production methods used to create the distinctive London Underground signs, these two-dimensional works move us from the cinematic, to the surface, to a sense of public displacement or transportation. Similarly the tubular sculptures on the floor also find themselves in dialog with heat and extrusion, bringing together a larger notion of flow and cycle of material to Deshayes’ practice. In Cramps the most overtly body-conscious of the works, expanded foam wall structures resemble intestinal systems at large, confronting us with our relationship between plastics, vacuform and petroleum’s organic roots.

Jack Lavender appropriates a myriad of everyday industrial materials, advertising and pop references in work that embeds surface tension with its chosen mode of display. Referencing formats of sculpture, yet defying those methods, Lavender chooses to work compositionally with these footnotes, evolving dichotomies to examine topics of value and status of materials.

George Henry Longly undermines sculptural props, plinths, pedestals to welcome conversations around the potential of a composite form. Longly’s practice (often referred to as GHL) further layers subtexts around branding, sexuality and symbolic language. The relationship to the body is never far, in this exhibition, a new media sculptural installation features the casting of the (male) body as a protagonist for material spinoffs, which are redeveloped into archetypes.

Matthew Smith flatly resists symbolic meaning, incorporating representations of everyday objects that slip between two dimensional, three-dimensional and the copy. Embracing the anonymity of surface and the emptiness of products as a valid resistance method, Smith’s sculptural wall works are subtle and defiant, tough and direct.
www.elizabethdee.com