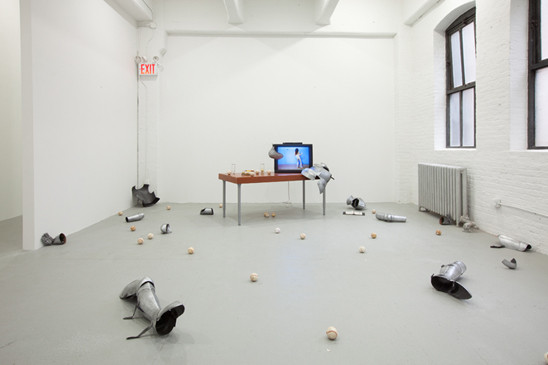 This summer, on the occasion of the gallery's 10th anniversary, we are pleased to announce an evolving exhibition featuring discrete autonomous works on continuous rotation. For two months, seminal pieces from previous exhibitions as well as new contributions by invited artists will be displayed in the spirit of the gallery's ideas, past and present.

To commence, we will dedicate the main gallery space to Adrian Piper's The Big Four Oh (1988). Previously shown in Past Time: Selected Work 1973-1995, this compelling installation was presented by the gallery in collaboration with Piper in 2010 at the former Dia Center for the Arts, and was subsequently awarded the Artist Award for Distinguished Body of Work by the College Art Association. In addition, works by Josephine Meckseper, Mac Adams and Philippe Decrauzat will be on display from June 29 – July 20.

The gallery has commissioned a selection of original essays written in relation to certain featured works, which will also be part of an adjunct exhibition located on the gallery website. This online exhibition of new texts will feature contributions by Karen Archey and Daniel Reich, among others (list in formation).