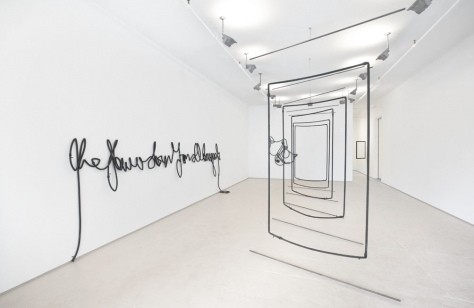 "Why if anyone were to ask me today what virtue I consider the finest, I should answer without hesitation — honesty. Oh Laura! I should like all my life long, at the very smallest shock, to ring true, with a pure authentic sound. Nearly all the people I have known ring false. To be worth exactly what one seems to be worth — not to try to seem to be worth more."
Andre Gide, The Counterfeiters, p.201

"Even though I have been out of psychiatric hospital for two years, I am still a missing person for the public who have heard of me. I am neither alive nor dead and, though I have not been buried, I am 'bodiless'. I am simply missing, which was Foucault's splendid definition of madness.
In contrast with someone who has died and whose death marks the end of the life of an individual who is then buried, a missing person runs the curious risk of reappearing large as life (as happened in my case). ... It is important to recognize – and can be observed everyday – that the peculiar status of a missing person who may reappear gives rise to a sense of unease and disquiet in relation to him.”
Louis Althusser, The Future Lasts a Long Time, p.23

Honesty is a nice idea, but it is only a metaphor inexorably connecting us to the subject-supposed-to-know. And what that subject should know is the necessity of honor, of appearance, clothed and adorned. Fidelity—a word whose currency has been rising—is more honest than the honest. We might say that it functions metonymically, rather than metaphorically, since the lossy metonym manages to carry on in plain sight of a loss of fullness. Fidelity is action rather than identity or vestment, and can pass through holes in knowledge that would appear to the honest man as an impasse. Fidelity, outside of the totalitarian demand for honesty in the sight of the law means the right to count exactly what we do not own as much as what we do, to think and to talk about our problems, and to undertake serious research in the manner of universal education: to come to know something, and attempt to relate it to everything else.
If in recent work, the subjective relation to the objective conditions of scarcity of materials was organized around having something that one should not—organized that is, around the minimal condition of illegality, this current exhibition continues to address the same problem by not having something that it should: complete knowledge of the contents of the exhibition. This last contortion: with sculpture’s increasing bifurcation—between architecture and the readymade, or the built environment and epistemology—how is it possible to think material, to arrive at a criteria for the selection of material which would not be purely subjective (or a speculation on its exploitable interest)?
In a famous photograph of French philosopher Louis Althusser, he stands in front of a chalkboard, cigarette dangling from his mouth, hand hovering over the completion of the phrase that would become the title of his autobiography, L’avenir dure longtemps. Althusser’s autobiography circulates around a hole: a description of what he is able to recall immediately before and after strangling his wife. Partially obscured by his body is a diagram. Having searched, these years later, for the meaning of this diagram, exhausted all possible candidates amongst friends and acquaintances for the subject who knows, this diagram becomes the unknown that generates all operations in the current show.
Having built exhibitions mindful of the real determinations of abstraction over the past years, while seeing abstraction reduced to no more than reified contents taking on the clothing of the productive force of a formalization, it becomes necessary to alienate abstraction once again from the figurations that have accreted to it. That is, to insist once again on operating with functions that are not yet “semiotically” formed, and matters that are not yet “physically” formed—to work ahead of the forms and substances, expressions and contents a work will distribute. Thus it is important to say that the exhibition is not organized around the artist’s subjective not-knowing (who cares if the artist is honest about that kind of thing or not?) but around the forms of activity that are possible on the edges of the hole produced by a truth as it comes to rupture the previous settlement of knowledge.
It is difficult to argue against the view that the image in art occupies a place homologous to that which language has in psychoanalysis: attaining its primacy by virtue of being both the only object as well as the means of practice for these endeavors. But the image always falls short of functioning as index, measure and ground of both the necessity of the abstractions that organize the field as well as the measure of their relation to any given concrete application.
Is it possible (if there is still any place at all for considerations of language in visual art) for art to operate at the level of the real, to materially write in a manual space, a space of heterogeneity prior to the attainment of forms of expression or content? Our sense of the continuing bifurcation of sculpture means that it would be tempting to borrow Serge Daney’s description of cinema in saying that, sculpture too, no longer has any specificity other than to receive images that were not made for it. But if this reception could be thought, not as a passive inundation, but as a way of drawing-under—subtracting—material operativity relative to the image, we might find ourselves working outside of the logic of recognition—a pragmatics that is no longer a case of producing a new image, or a new image-regime, but producing the limit-experience of the image as such: not where the image ends, but in the immanence of the image—where it begins. All that is pictured might still reappear, and be capable of producing the full range of affects associated with the no-longer missing.

"One final word: I hope that those who think they know more or have more to say will not be afraid to do so. They can only help me live."
Louis Althusser, The Future Lasts a Long Time, p.286
www.elizabethdee.com