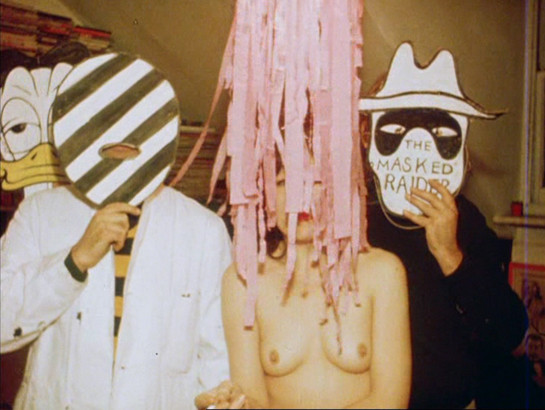 Elizabeth Dee Gallery is pleased to announce the first solo exhibition at the gallery and United States debut of paintings and films by Jeff Keen [b. 1923, UK]. This important first exhibition in New York will explore in depth Keen's most influential and fundamental period of work, the 1960s and 1970s, during which he established a prolific visual practice extending to five decades of drawing, painting, experimental film, concrete poetry and performance.

Keen is primarily known as a legendary underground filmmaker whose work and activities coincided with the emergence of expanded cinema. He was one of the original participants in the 60s at the London Filmmakers Co-op. The BFI and later the British Arts Council supported and enabled Keen to make films and devise a multitude of drawings and paintings. During this period, Keen maintained jobs as a landscaper in the Parks and Recreation department of his hometown, Brighton, and sometimes as a postal worker delivering mail. The artist made movies primarily on weekends with his family and friends in an ensemble cast and his painting and drawing studio was for 40 years a repository of props and art that accumulated to extraordinary effect that has been fully documented.

Embracing the increasingly available technology of 8mm, 16mm and prevelance of American Pop imagery and Comics [and later Punk], Keen employed modes of popular media, technology and music in painting, drawing and collage using a stop frame animation process and in camera editing, resulting in active and evocative films. Utilizing a frequency of speed not found in work of the period, Keen, through the possibilities of the medium, brought new life to the significance of radical visual media.

Keen was able to merge Surrealist and Dadaist ideology with a social-political critique of American consumerism with the spontaneity of the Beat and 60s era. These works are avid responses to an overwhelming sense of increasingly proliferating media and commodification during the decade. He often explored his experiences surviving World War II in this material, focusing on monuments of power and the ever-present war within the artist as individual. This took the form of invented characters or corporations [i.e. Rayday Films] with brands, personas or protagonists in a fractured narrative style. Performative and reminiscent of Surrealism's influence on his formative period in the 1950s, Keen additionally drew from English Romanticism and his love of language to devise a novel method of working in a newly evolving medium.

Keen's work can be viewed today as prescient to modes of film and video that began to take cultural references into an exploration of our own larger social portraiture. His enthusiastic embrace of alternative modes of discourse in a pre-internet age is astoundingly fresh today, and the diversity of his practice calls to mind both painters, film and video artists who succeeded him, from such figures as Derek Jarman, Richard Hamilton and Linder, to American artists such as Jack Smith, Ryan Trecartin and Peter Saul.

Jeff Keen very rarely exhibited his drawings and paintings. He first showed Rayday Film [1968 - 1970] in the First International Underground Film Festival at the National Film Theatre in 1970. Upcoming 2012 exhibitions include a retrospective at the Brighton and Hove Museum, the National Portrait Gallery, London and Tate Modern, London.

In conjunction with the Jeff Keen exhibition, we are pleased to announce a special initiative for 2012, the first of an ongoing series of collaborations with galleries who share common philosophies and interests. Anke Kempkis of BROADWAY1602 will be our first collaborator to inaugurate the series with the related exhibition, Façade is Cracking: Jeff Keen Drawings from the 1950s. This exhibition will include film related assemblages and documentation along with rare works on paper at her gallery, located at 1181 Broadway [3rd Floor] in conjunction with the solo exhibition, Anna Molska Glasshouses. The exhibitions open on January 14 and extend to February 28, 2012 with an afternoon reception from 3 - 6 on Saturday, January 14. For more information, please contact BROADWAY1602 at www.broadway1602.com or +1.212.481.0362.
www.elizabethdee.com