Material For The Making 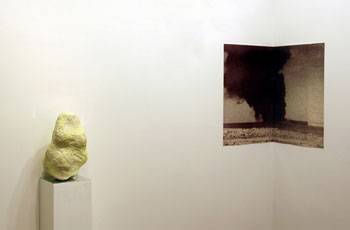 Elizabeth Dee Gallery is pleased to present an exhibition of work by Mai Braun, Kori Newkirk, Gail Thacker, and Kerry Tribe organized by Jenny Moore, the gallery’s newly appointed Director. The exhibition will open Saturday, January 6th with a reception for the artists from 6-8pm.

Material for the Making brings together a selection of works that employ singular materials and medium specific devices for investigations into form, the translation of memory, and the reinterpretation of images and events. A commitment to materiality and an emphasis on tactility pervades much of the work presented in the front room of the gallery, while the back room is devoted to a filmic exploration of the seemingly inherent futility in objectively depicting one’s subjective reality. Gathered together, these works resist definitive statements about past or present and operate in an open-ended dialogue inflected with contingency and catalyst.

Mai Braun’s sculptures strike a delicate balance between form and formlessness, abstraction and representation. Described as experiments in “a test-lab for proto-formalist sculpture,” the work is made from a mixture of found materials—cardboard boxes, newspaper—and building supplies—tape, wood, and length of tubing—with evident immediacy and economy of means. Her recent work locates particular images of destruction as points of departure for the making of new three-dimensional objects. The resultant sculpture takes on a life of its own through the process of its making and the formal accidents that happen along the way, distorting its referent while creating a symbiotic relationship between the image that inspired it and the form that follows after.

Mai Braun is a Frankfurt based artist whose work has recently been shown at Feature, Inc., Ampersand International Arts, San Francisco, and Kluuvi Galleria, Helsinki. She has had solo exhibitions at the Chinati Foundation, Marfa, TX and Brooklyn Fire Proof.