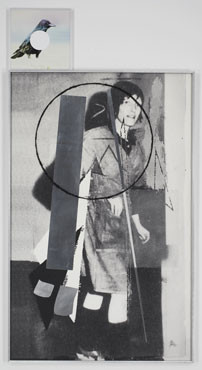 These two Brooklyn based artists share an interest in the potential of found images and techniques, which they treat with various stylistic and conceptual interventions. For Aldrich this means a gesturing toward painting in the form of brush strokes, cuts in the canvas, and collaged elements. For Sparks this means a reliance on the manipulation of imagery—mainly culled from (sub) cultural sources—through a process of scanning, cropping, and collaging materials. Featured in the exhibition is a collaborative series of three woodcuts. The woodcut, and the process of creating it—in which the imagery undergoes a literal and conceptual “flipping” from original image, to wood block, to printed image—not only echoes the way Aldrich and Sparks deal with their work specifically, but also serves as a surrogate meeting point and manifestation of this social collaboration between them.
Aldrich’s large canvases express a range of aesthetics and subject matter. Their vast white expanse acts as the ground on which the artist works through many points of interest including misbegotten signifiers, obscure historical anecdotes, and role playing games. Together they form a group of systems in which Aldrich articulates his experience of the interaction and existence of objects in contemporary society. His combination of multiple and varying references with poetic resonance demonstrates an awareness of the often contradictory relationship between the process of “painting” and “the painting” itself.

For this exhibition, Sparks presents selected images from her ongoing series incorporating musicians as primary source material, alongside her more recent and (art) historically charged consideration of Gerhard Richter’s sketches of Gudrun Ensslin. Ensslin, a member of the controversial Baader-Meinhof Group, served as subject matter for Richter’s “October 18, 1977” series. By choosing to focus on Richter’s sketches, rather than the original photographs, Sparks comments on both Richter and radical politics, on both the image and its purported origin. She builds up the surface by formally breaking down the figure, covering parts of the image with geometrical shapes and scanned stencils, and repeating compositional elements in aluminum foil and glitter.
This disruptive act serves to erase and enhance the images, imbuing them with a desire that is both seductive and obstructive.

Richard Aldrich’s band ‘Hurray’ was included in Bring the War Home,, presented in 2006 at Elizabeth Dee Gallery. His work will be presented in the upcoming exhibitions Beneath the Underdog, Gagosian Gallery, NY; Paintings, Roger Björkholmen Galleri, Stockholm; and at Marc Foxx, Los Angeles, CA. He is represented by Marc Foxx, Corvi-Mora and Yvon Lambert.

This is the first exhibition of Meredyth Spark’s work at Elizabeth Dee Gallery. In 2006, she had a solo exhibition at Galerie Frank Elbaz, Paris. Her work has been included in Just Kick It Till It Breaks, The Kitchen, NY; the 2007 Moscow Biennale, curated by Nicolas Bourriaud; Music is a Better Noise, curated by Bob Nikas, P.S.1, NY; Thank you for the Music (London Beat), Spruth Maggers Lee, London; and First Look Photography, Sean Kelly Gallery, NY
www.elizabethdee.com