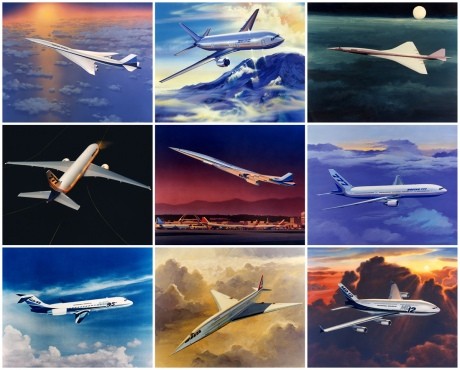 Elizabeth Dee Gallery is proud to announce an exhibition of new work by Miranda Lichtenstein. Photographs from the past year will be presented along with Lichtenstein’s debut video, Everything Begins and Ends at Exactly the Right Time and Place. A reception for the artist will be held at the gallery Saturday, October 20, 6-8pm.

Through her evolving practice, Lichtenstein has explored utopian environments, failed systems, the pursuit of higher states of consciousness, the uncanny, and the sublime through the photographic medium. These interests converge in the gallery space for the first time with the presentation of a variety of photographic genres. Themes that appear at first glance to be represented by individual images, in fact, flow throughout the entire exhibition, compelling us to question the nature of representation, particularly of the natural world.

In 9 Planes, 5 Unrealized, 2007, utopian ideals take shape through aerodynamic ingenuity. These re-photographed portraits of both real and imagined airplanes serve as doubly mediated representations of travel, possibility, speed and desire. Captured in mid-flight and suspended against a multitude of colored clouds, they embody an individual’s attempt to reconcile one’s place in the natural world. Repurposed as “painted photographs,” the plane images relate to Lichtenstein’s ongoing series of Shadow Photographs. In this body of work, painted outlines of plants and flowers take on the appearance of shadows cast by non-existent still-lifes or vegetation set against a darkened sky, thereby challenging the verisimilitude of the photographic process through the application of painterly traditions. The doubling at play in the shadow photographs echoes throughout the exhibition in the form of diptychs whose subject matter ranges from an ancient tree felled by a violent storm to the artist herself entranced by a homemade Dreamachine (a stroboscopic device that produces visual stimuli). Throughout these images, evocations of the sublime in the natural world are juxtaposed with a more interior search for enlightenment.

Everything Begins and Ends at Exactly the Right Time and Place, 2007, engages representation and doubling in yet another way. Inspired by the 1975 cult classic, Picnic at Hanging Rock, Lichtenstein (who shares her first name with the central character in the film) stages her own disappearance from a wooded, rocky landscape. The unsettling events depicted in the video are enhanced by its soundtrack, which features a clip from the original movie. Halfway through the video the action repeats, looping twice while the soundtrack from the movie is uninterrupted. Perception of the depicted events thus shifts between what is observed and what is remembered, a state of flux that persists in all of Lichtenstein’s work.

Miranda Lichtenstein has had solo exhibitions at The Hammer Museum, Los Angeles, The Whitney Museum of American Art at Phillip Morris, New York, and Gallery Min Min, Tokyo. Her work has been featured in shows at the Renaissance Society, Chicago, the Museum of Contemporary Art, Miami, Creative Time, New York, Yerba Buena Center for the Arts, San Francisco and Stadthaus, Ulm. Her work is in the permanent collection of the Solomon R. Guggenheim Museum, New York, The Hirshhorn Museum, Washington DC, and the New Museum, New York.
www.elizabethdee.com