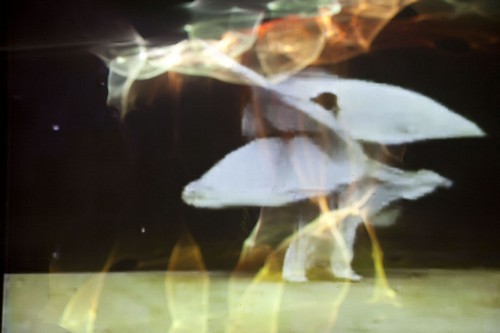 Elizabeth Dee Gallery is proud to present an exhibition of recent photographs and a new video work by Miranda Lichtenstein.

Given current conversations around photographic abstraction, Lichtenstein questions what role depiction might continue to play in the capricious visual field. Collapsing both physical and digital screens, she interrogates the metaphorical and material filters that have been assimilated into image production and reception. The work’s subject matter can at times be difficult to locate — representation is present, but it is in flux. Her polyvalent strategies of display avoid conventions of seriality, and explore differing modes of destabilized representation.

Lichtenstein’s Screen Shadow pictures employ a paper screen to form a silhouette, captured by the camera in a manner that obscures the relationship between foreground and background. With her still lives, objects are shot in conjunction with their mutated reflection, invoking the invisible boundary between the camera and its subject. Her photographs of singers caught mid-performance have been stripped of all color and detail, testing the limits of what constitutes decipherability. In Untitled #20 (Palucca), an enlarged and polarized historical image of a modern dancer embodies the obsolescence of the negative, for so long considered the “ground” of the photograph. The video in this body of work, Danse Serpentine (doubled and refracted), corresponds with impulses in the photographs by doubling and refracting Louis Lumiere’s 1896 film of the modern dance and lighting pioneer Loie Fuller. Projected on to another type of screen, a folded theatrical curtain, like many of the photographs, its subject is reduced almost entirely to shadow and light, and teeters on dissolution.

Miranda Lichtenstein’s work has been shown in institutions including the Hirshhorn Museum and Sculpture Garden, the Hammer Museum, the New Museum, the Whitney Museum of American Art, and most recently the Guggenheim Museum in the Haunted exhibition. Her work has been written about in Artforum, Flash Art, Art Review, Art in America, Tema Celeste and the New York Times. This is her fourth exhibition at Elizabeth Dee.
www.elizabethdee.com