more Me than Mine 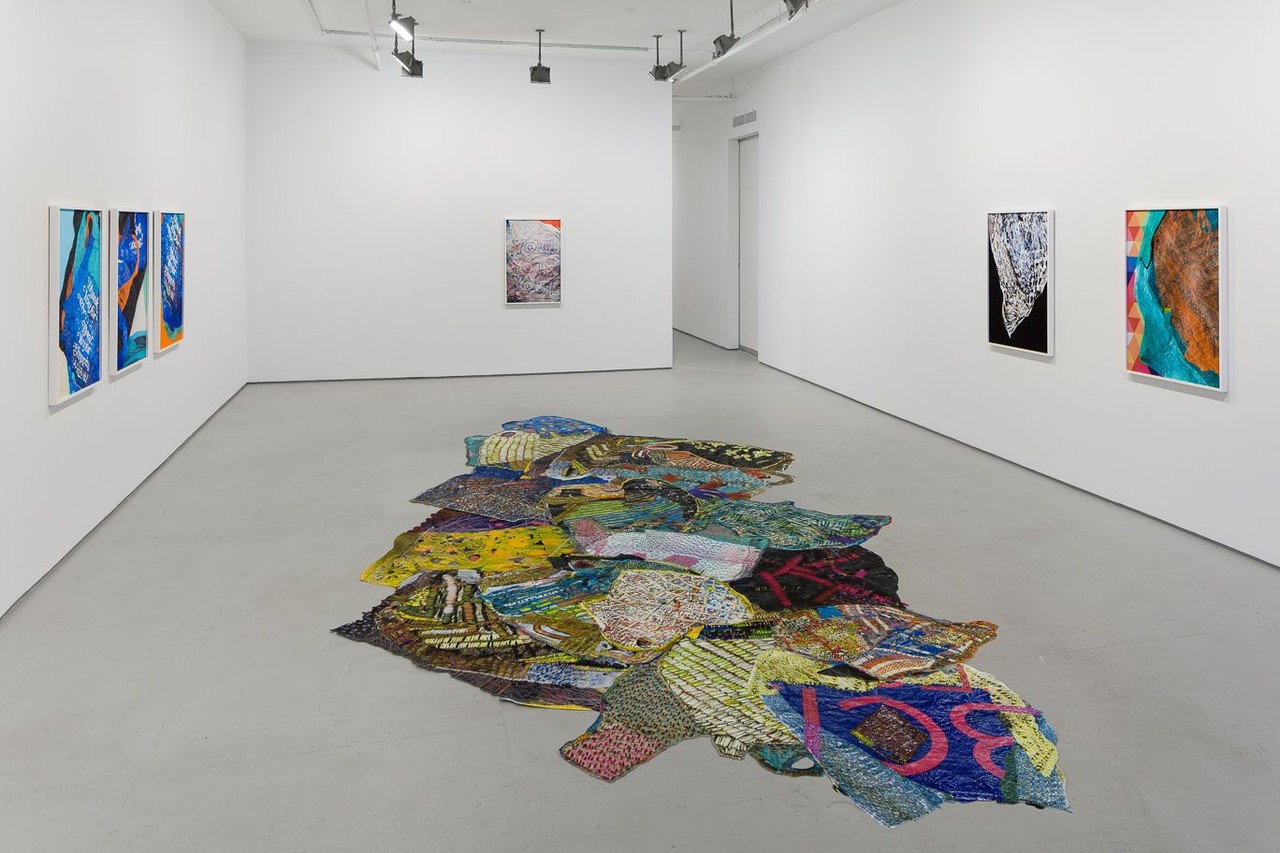 Installation view, more Me than mine, 2015, Elizabeth Dee, New York
MIRANDA LICHTENSTEIN
more Me than Mine
21 November - 19 December 2015

Lichtenstein’s exhibition reveals art’s transformative potential when it is incubated over time in a collective process, fed and activated by collaboration. For nearly two decades, Lichtenstein has worked in varied subgenres within photography’s historical archetypes: marginalized contemporary landscapes, refracted still life, performance based portraiture and process-oriented abstraction. Critic Barbara Pollack has praised Lichtenstein’s practice as being “a relinquishment of a decisive statement within the trends of post-appropriation photography working against the conventions of the photo-essay.”

In this exhibition, Lichtenstein presents a series of dynamic, outsized images of colorfully pop bodega bags that speculatively refigure their subject matter. The surfaces in these photographs, tensioned and topological, are derived from the work of New York based artist Josh Blackwell, who has altered and repurposed the bags through a process of intensive transformation involving cutting, puncturing, ironing, painting and stitching. With Blackwell’s generous invitation, Lichtenstein has spent over two years photographing his work, first in his studio, and then in her own. Photographs of these ubiquitous bags, many inscribed with “Thank You”, illuminate the troubling humanist/capitalist promotion of the individual as the center of the world, no longer separable from the petroleum-based, ultra-disposable product of the everyday. The affinities and admirations between the artists, the natural attraction between parallel practices, can upend singular agendas and unlock complex social and creative potential. It has allowed Lichtenstein’s images to represent several positions at once: our implication in ecological ambivalence, an inquiry into authorship, and the value of time to deeply examine another artist’s work.

The largest work in the show is a fully collaborative floor piece by Blackwell and Lichtenstein, using flatbed scans of Blackwell’s sculptures, inkjet printed, silhouetted and cut away. Together they have created an island of flotsam within the gallery’s main space.

The title of the exhibition, “more Me than mine” comes from the work of another artist Lichtenstein is in dialogue with, the poet Anthony McCann. His words encapsulate one of the primary queries of the project, proposing the possibility that the artist’s subjectivity could be embodied through de-emphasizing ownership.

Miranda Lichtenstein’s photographs have been shown in institutions including the Hirshhorn Museum and Sculpture Garden, the Hammer Museum, the New Museum, the Whitney Museum of American Art, the Guggenheim Museum and most recently the Hèrmes Foundation in New York. She has been featured in Artforum, Flash Art, Art Review, Art in America and the New York Times. Her work is in the collections of the Guggenheim Museum, New York, Hirshhorn Museum, Washington, D.C. and the Baltimore Museum of Art among others. She is currently included in Artist’s Choice: An Expanded Field of Photography curated by Liz Deschenes at MassMoCA, North Adams, Massachusetts through April 2016. She is an Assistant Professor in Photography at Mason Gross School of the Arts, Rutgers University.

For more information please contact Nicole Siegenthaler at nicole@elizabethdee.com or +1.212.924.7545.

Miranda Lichtenstein | More Me than Mine

The edges of Miranda Lichtenstein's new photographs are indeterminate, though not in a physical sense. Instead each intuits a series of questions surrounding their making, at the center of which is: at what point does an artwork become a subject, or an object? These works result from a two year engagement with the work of fellow New York artist Josh Blackwell, unfolding as part-dialogue, part-homage, and part-obsession, all the while maintaining their own autonomy as artworks.

Like most of Lichtenstein’s photographs, they’re shot in a small corner of her studio with mirrors and paper screens, treated as malleably as their original materials. For years, Blackwell has been embellishing the ubiquitous detritus of our contemporary society, plastic bags, through intricate yarn embroidery, laser cutting, and the physical fusing of multiple elements. Originally begun as a collaborative effort, Blackwell’s work recedes in the narrowness of the camera’s viewfinder - this intuitive process of selection favoring Lichtenstein’s own subjectivity.

The resultant images are records of her own engagement with Blackwell’s painting-sculpture hybrids. They’re cropped and enlarged to a scale outside themselves, depicted in fragments with a tactility that mimics our own relationship to the material, something we handle potentially even more than each other. Works like Thank You inhabit a pop sensibility, flattening and recasting the bag’s familiar text (that has been degraded in Blackwell’s work) as a slogan simultaneously peppy and pessimistic, as if the plastic bag itself were aware of its snide humor as a positive and friendly pollutant. Photographs of Blackwell’s Bodega bags alternatively work to inflate their eponymous subjects, giving otherwise flattened works volume, form, coupled with the seductive passage of light. Plastic appears simultaneously fleeting and disposable, as well as monolithic in its permanence and recurrence.

These investigations place Lichtenstein’s works within a complicated though often overlooked history of photography’s relationship to sculpture, specifically that of artists photographing their own work or other artists works. Lichtenstein points to Man Ray’s photograph Dust Breeders, a long exposure of dust gathered on Marcel Duchamp’s Large Glass in his New York apartment as being fundamental to this – it’s an instance in which the photographic representation divorces itself from the parameters of the work it depicts. A similar operation is enacted in the work of Louise Lawler, in which works themselves fade deeply into the networks and associations they inhabit. Through this, the artwork itself becomes its own kind of found object, one replete with signifiers. This does not diminish its original authorship, but instead affirms the artworks’ status as contemporary artifacts of our time, that can be used to develop understandings outside and further than itself.

Throughout the works complicated twists of ownerships and authorships (in most images, Blackwell’s work as rendered is nearly unrecognizable), what remains at its core is the generative affinities and admirations that emerge between artists. Underscoring this is the exhibition’s sole collaborative work, Welcome Water, a sprawling pile of outsized prints of Blackwell’s work. Scanned, and in some instances pieced together by Lichtenstein, each element displays a hyper level of detailing with a space foreign to the photographic image. Translated and transformed by the light of the scanner bed, they spread and expand across the gallery floor - edges overlap, and individual elements blur into a new whole. Mimicking the operation of Lichtenstein’s own photographs, the works apparent mutability functions as an outpouring of generosity, and speaks to a malleability of objects and ideas that remains separate from their authors.
www.elizabethdee.com