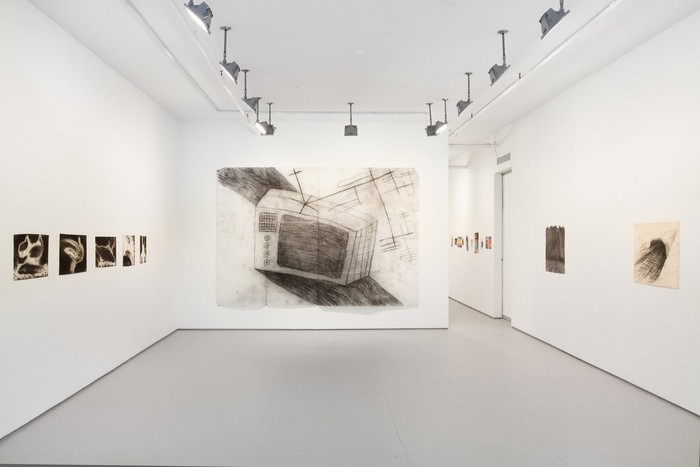 Elizabeth Dee proudly presents a solo exhibition of drawings, paintings, photographs and books by Swiss artist Miriam Cahn. A beloved and historically important voice in Switzerland, who represented her home country at the 1984 Venice Biennale, this is the first presentation of Cahn's work in New York since her drawings were shown at the reopening of the Museum of Modern Art that same year, nearly three decades ago.
Cahn works within many disciplines, intimately and intuitively, using distinct materials to unfold systematically discreet, yet organically relatable cycles of works. her practice relates on many levels to elemental difference channeled through the physiological and existential natures of being female. At times, she embarks on performative acts that produce two-dimensional works, for instance, grinding chalk into pure pigment that she imprints onto paper with eyes shut. Other pieces convey the rawness of life in alternate ways, corresponding, for example, with the artist's own bodily cycles. Cahn plays with the tension between involuntary activity and ritual modes of access to these behaviors. She might decide upon a predetermined amount of time - a matter of hours, a night, a week - to feverishly complete a body of work from scratch. When she returns to the pieces, she never makes adjustments; rather, she edits: approving or rejecting her creations wholesale. "How could you correct a performance?" she has said, "It either works or not."

The subject matter of Cahn's work dictates not only a record of her own life but also, indistinguishably, a chronicle of the historical events that have informed it. The evolution of television and news media, from her mid-century childhood to today, has been a pivotal point of reflection. She has incorporated appropriated televisual images and depictions of the box itself into her work, particularly since the popularization of onscreen human atrocity, as with Sarajevo in the 1990s. Cahn has taken more immaterial themes as subjects as well, such as recurring fears of falling - whether having originated subconsciously or from lived experiences - which resurfaced in the artist's work after 9/11 as a sinister, downward pull perceptible in her landscapes rendered as abstract voids and alpine escape routes.

Cahn applies a spectrum of formal sentiments to her drawings and paintings, from austere charcoal intonations to swelling Fauvist palettes. Whether gushing or arid, as enigmatic hollowness across figures and forms lures viewers into the same, inexhaustible dream. Drawing from a powerful command of surrealistic traditions, Cahn merges antitheses like corporeality and spirituality and weaves exterior influences as unwieldily dire as war into her subjective realm, as demonstratively subtle but psychologically raw aberrations. All together, these works on view, produced over more than 30 years time, embody narrative threads that plumb the circularity of gesture as irrepressibly personal and political. The main gallery is a selection of works chosen for this exhibition, and the back gallery is a cohesive room installation arranged by the artist.